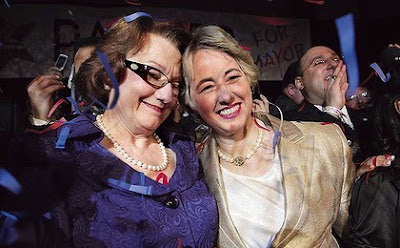 Houston Mayor-elect Annise Parker
celebrates her runoff election victory
with her partner of 19 years, Kathy Hubbard (in purple)
I love to see a woman beat a man make history. Especially when that woman is a lesbian.
In this case, Annise Parker was the first openly lesbian woman to be elected mayor of an American metropolis: Houston.
Every now and again the citizens of Texas get it right.
I also love to see it when history making members of the GLBT community show that they, too, cherish loving, longterm committments. Parker and her partner have been together 19 years. They have two children.
Why their two children are denied married parents doesn't make any sense to me. Kids of gay parents have it tough enough, don't they?

Take Mason, for instance, a young Austin resident who spoke before a public crowd to say he gets teased at school. You don't come from a "real family," is one taunt he's had to endure. And as research has now shown, there are psychological consequences of denying gay rights.
But in order for Parker to win the Houston election, she had to make some political and very personal concessions. During a campaign debate she stated she would not push for same-sex partner benefits for Houston's city workers. Denying health insurance for her very own wife partner.
“Personally it’s very important,” she was quoted as saying, “but, as mayor of Houston, do I want to engage resources in fighting that battle, or do I want to tackle the budget? Do I want to tackle drainage? Do I want to try to put more police officers on the street? It’s the difference between the personal and what this city needs.”

I'm amazed. I lived in Montrose during the years the Houston police terrorized the gay community.

The community organized to fight for their rights and things improved. But I never thought I'd see the day that a majority (pickup-truck diving bubbas) would vote for a gay woman mayor.

Congratulations to the city!

There is still hope for humanity...

Every once in a while these wonderful things happen. So happy!

That is a tough call to make--but I see her point.

Wow! I had not heard about this. PROGRESS! She sounds like a very wise woman.

OMG, that is amazing. I just read an article on your governer, what a fucking nightmare. Arrogant? Oh Lordy! He takes credit for all the good and none of the bad. A real snake that one

I'm new to your blog through eminpursuit and I so look forward to catching up! Congrats on the mayor -- how very progressive, finally!

Woot! Good for her! Every once in a while, there is a ray of sunshine poking through.

Texans continue to surprise me. Who knew they could be an enlightened bunch?

Congrats to her! That's a fantastic victory :)

I'm very happy to hear this!

Yes, Texans do get it right occasionally, but unfortunately not often enough. I was very happy about this result, though.

In Texas, wow. Good for her.

I still wonder how long it will take for out country to accept that gay PEOPLE and straight PEOPLE...at the end of the day, are just PEOPLE. Neither more, neither less.

This really is wonderful news. And she's right - incremental changes. It will happen in our lifetime.

Ah positive things do happen over there after all.

Swamp theory is often the best approach. If you jump in and thrash about you go under pretty swiftly and no-one notices, if you stay calm and make small moves in the right direction you tend to get there in the end.

I could not live in the US though - I don't have the emotional energy to cope with it. Australia was more conservative than it is here but the US is an all together different kettle of fish. My blood pressure would be permanently through the roof. Shame though - as most Americans I've met in blogworld are wonderful people and it is a beautiful country.

Did you read this? Just goes to show how far we have to go!

I work in the field of challenging discrimination in the workplace in the U.K, so to hear postive news like this uplifts me, even if it is overseas - gives me hope.

So excited for Houston!!

It's so nice to hear about something going well. They look so happy. I hope she does a good job for Houston and doesn't disappoint. Yeah, I'm thinking they always do - but really, hasn't it been a ridiculous decade?

Merry Christmas, Mrs CoffeeYoghurt Woman. Now where are you?! Just because it's the holidays, you can't stop blogging! Get back here!

yee-ha! this is awesome.