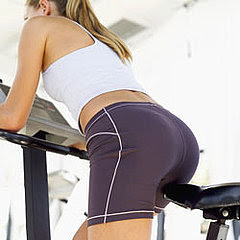 So I've joined the army of resolutionists. I admit it. A regular January warrior. I didn't plan on being one but it snuck up on me unexpectedly. In the form of my husband suggesting we start back up again. In other words, it wasn't even my idea, my resolution, as pathetic as that is.
My workouts had been flagging for months when the gym decided to do a large overhaul. The renovation left we gym rats to elipticize and treadmillerize in a space about as big as the average bathroom. Where you could smell the guy sweating five machines down. My motivation dropped to negative five and my couch attendance reached an all time high.
Now, however, we've got a shiny, new beautiful facility and it's actually a pleasure to go. Row of windows facing a vista of trees. Long row of flat screens. I usually read but tonight I watched, and listened via headphones, to American Idol. Five hundred calories burned instead of consumed. Much preferred.
So here's my gymservation for the day. There needs to be a row of mirrors situated so we machine joggers can see a rear view of our tookus in motion. I came up with this idea soon after an attractive, spandex-attired woman approached the machine in front of me. She was about my size. A little on the plump side but presentable. And then the jogging began. Ooh lawdy. The swingin' and the swayin' and the gyratin' of her booster seat illuminated by the sheen of her polyurethane was... well, my nightmare in motion.
And then I thought of my booty. I had to fight off the urge to turn around and see if the guys observing my booty-nomics had an equally horrified look on their faces. 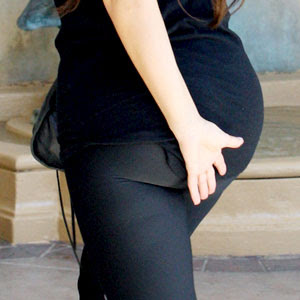 It's probably for the best, then. The no mirrors. These fitness designers know what they're doing. If we I knew what we I looked like from that angle we I might not leave the house. Ever. And this way, in my state of denial, I'm out there workin' it.
Ten points if you can guess who's hiding her booty in the picture above.

Email ThisBlogThis!Share to TwitterShare to FacebookShare to Pinterest
Labels: exercise, gymservations, weight loss, yet another excuse to avoid exercise

How did you get that shot of my buttocks, dammit!

My hat is off. Yeah! I'm hoping my tookus will be following yours. I'm needing an overhaul.

Before I got too lazy, I went to curves. I liked that there were no mirrors.

Is Jennifer Lopez in the picture?
No mirrors is a brilliant idea to keep us going back to the gym. Very long T-shirts also help.

We're off and on-ers. Know the value, know how, not in a rhythm. And in my experience, that's the key. Habit. Takes me about 3 weeks to make the habit so I only have to have willpower that long.

That looks like a Kardashian butt, methinks. Not that I actually pay attention to those weirdos... I have enough in my own life to roll my eys at.

Good for you getting back to the gym! I deliberately did not make that my resolution, because I knew I'd break it immediately. However, I will be going back, and going as often as I can. I always feel great after a good workout. Great way to get rid of stress too! I wish my hubby would go with me (or do anything out of the house with me, for that matter!) but our schedules rarely jive. That, and I know he'd never go to the gym.

Oh swell, now I have the "I like big butts" song going through my head. THANKS.

That's why I always take the back row of treadmills...I can *feel* mine shimmying and swaying, there is no way I actually want me -or anyone else- to see that!

that;s kid of like how they only have little tiny mirrors way up high where you can see your face and not much more in the maternity ward at the hospital...

This is why I'm glad it's in the back.

I don't know who's in the picture, but I know it's not me. I would never wear black to workout. Though I found out, after joining the gym a year or so ago, it works better for my health if I actually go. Who would a thunk it? And the only weight I've lost is the dollars leaving my wallet.

I don't think that even made sense.

Best piece of advice I ever received from a teacher: Erase the board in an up-and-down motion rather than a side-to-side motion. Side-to-side makes the bottom jiggle.

I have no idea on the photo--but the hair looks too light for a Kardashian.

that's why I order jeans online rather than face a 3 way mirror.

My guess is Wynonna, too.

Ten points awarded to Jenn...at You know that blog. The blogger who posted the picture of the woman covering her butt (or trying to) belongs to Kardashian (I think Kim). I think it's amazing that Jenn can spot a Kardashian butt from such a long distance away!

Ok, this is weird--I was just flipping channels and they had this shot on TMZ--they said it was Sofia Vergarra from Modern Family. Not that I should care this much!

Jenn -- Wow! That is freaky. I don't know much about the Kardashians but with all the television spots, I didn't think her arse would be that big. But then there's the miracle of spanx, ya know?

I try very hard to pick the treadmill in the back row for that very reason. Good for you getting back to it. I was on a good routine, until my only pair of workout pants tore. Last week I bought 2 new pairs, but "forgot" to take them out of the bag. This weekend they move from the shopping bag to my workout bag. Gah!

One of the things I miss the most this year is the gym--I have to mix it up with regular outdoor exercise, but I never do weights or abs unless at the gym. I never look at myself in the mirrors but use them for hearty visual eavesdropping on my gym colleagues.

I agree that the gym would be unbearable with more mirrors. I am always hocked to see what I look like when I move over to the weights area to use the mirrors because I have managed to convince myself that I am really improving while over in the aerobic area - then reality bites, as they say.