more novel synchronicity and the history of british rule

Yesterday I chose a movie to watch instantly, Restoration, starring Robert Downey, Jr. Restoration takes place during the reign of King Charles II, mid-17th century England . I had never heard of this movie despite loving RDJr and old English period pieces. The Restoration Period, I learned from the internets, occurred during the second Reign of the Stuarts, the "first kings of the united kingdom." The Stuarts were restored to the throne following a brief, early period of parliamentary rule headed by Richard Cromwell.

So. In the midst of my internets history lesson, I came across this brief timeline of British rule: 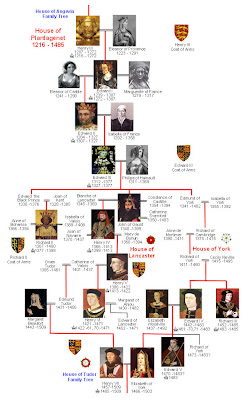 My eyes settled on The Plantagenets. Strange name. Never heard of this family or tribe or whatever they were. Or if I had, it hadn't sunk in. But I corralled my impulse to go down yet another wormhole of TMI and instead resumed watching my movie.

Fast forward to later that night. I'm in bed reading my latest novel, The Quincunx, set during early 1800's England. About 30 minutes into my reading I come across the following description,

"My own people, the Bellringers, he went on with considerable bitterness, are connected with some of the most ancient families in the kingdom. The blood of the Plantagenets runs in my veins."

Bizarre coincidence or mystical synchronicity? Maybe not so bizarre considering my interest in early England, both in novels and film. But to have researched the who's who of the British throne the same morning as the Quincunx paragraph the very same night? (I'm typically not that industrious).

I think that is eerily weird. And as I've said before, this kind of synchronicity isn't all that unusual with me. It happens once or twice a month.

My husband, Sam, told me he doesn't want to hear any more of my mysterious mind events until they involve a long string of numbers. As in lottery winning numbers.

But of course I have to share. So the next day (this evening), I tell Sam my latest happening. And I give him the background of the rulers pre-Plantagenets, the Normans and the Angevins by way of timeline.

To which he gets a strange look on his face.

You're not going to believe this, he says.

This morning he had randomly picked up a National Geographic in a friend's living room and what does he read? A piece about historians' increasing understanding of the early Anglo Saxons, the early Angiven people, the Normans and ... Ok, no, not the Plantagenets. He doesn't recall reading that name.

But still. The Plantagenets were direct decendants of the Angivens.

Maybe not all that freakish, but pretty dang close, right? Random National Geographic read during a random day of waiting on an inspector in a random living room.

So what do you think, reader? Do I have some kind of special extra-sensory power I should try to harness? Or are we just a couple of nerdy, boring Anglophiles who read too much?