turkey may never taste the same 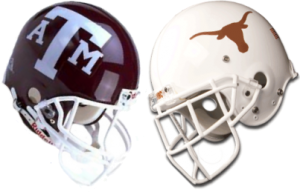 We interrupt the preparation of your family's Thanksgiving feast to bring you a special announcement.

Be it stuffing your turkey with oranges (like we do) or making a last minute grocery store run for parker rolls (like I wish we didn't do) or preparing a blender full of liquid fortification in anticipation of Aunt Martha, who, every year, without fail, puts on her unique version of the martyr syndrome, I want you to stop and hear what I have to say.

This evening at 8pm EST, on Kyle Field, the Texas A&M Aggies will meet the t.u. Longhorns on the gridiron for the 118th time and for what might be the last match up ever. 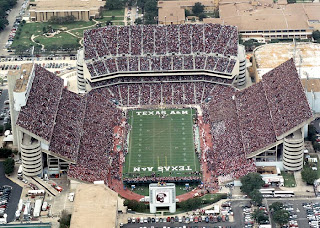 Here's my message: The Aggies want to keep playing the 'Horns.

Aggie head coach Mike Sherman has publicly stated he wants to play the Longhorns every year.

The chancellor of the Texas A&M University system, John Sharp, has publicly stated he wants to keep playing the Aggies.

"We want to make it abundantly clear we will play the game anywhere, any time."

Even the Texas Legislature might get into the act and mandate the annual rivalry.

So who is responsible?  Almost single handedly, the t.u. Athletic Director, DeLost Dodds, is responsible for the end of one of the longest running college football rivalries in U.S. History.  DeLies Dodds is the one who insisted on keeping the Longhorn Network (LHN).

DeLoser's choice to sign a $30 million deal didn't just piss off Texas A&M.  It also pissed off Missouri.  They've signed to leave the Big 12, too

Insistence on keeping the Long Hate Network also blocked the 'Horns from moving out of the Big 12 and into the PAC 12.  PAC 12 said, in effect, no to LHN and no to UT.  The 'Horns, much to their consternation, were left holding the LHN bag, stuck in an ever diminishing conference. 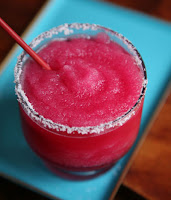 Ok, that's it. We conclude this special announcement. You can now go back to your pre-turkey dinner preparations and your liquid libations.  Just needed to set that record straight.

Gig 'em Aggies.  Beat the hell outta t.u. This year and any other year t.u. feels up to the challenge.

You could say I've been in something of a cooking rut. With three teens going three different directions, a dog, five chickens, and one sorely neglected beta fish named Molly, I haven't had much time to think cook let alone experiment with new recipes.

Mention a new dish and I cringe at the thought of reading a recipe, shopping for extra ingredients, more time in the kitchen to get the recipe right.

But, amazing for my track record, I tried two new recipes in the past week.

It started with fresh shrimp on sale at the grocery store and fresh tortillas in my cart.  Not having made shrimp tacos in recent memory (and I call myself a Texan?), I went searching and found a recipe that included Lime Cilantro Sauce here at Life's Ambrosia.

Now, usually I skip a new recipe's sauce because I'm lazy but this one sounded way too good to miss. And it was. Really tangy.  Amazing on the spicy shrimp. Out of sour cream, I substituted with plain yogurt - still amazing. Add chopped avacados?  Lawd have mercy.

The second recipe venture started with wilting strawberries in the fridge. The idea of another banana berry smoothie sent me to the edge and then to the internet in search of something different.

Thanks to Cookies on Friday, I came up with this wonderful Fresh Strawberry and Cream Cheese Bread.  Adding walnuts and ground flax seed changed the look considerably but everyone loved it, including four girls at my daughters' sleepover.

So two new recipe successes in one week.  Pretty pleased with myself.  My family's palate is pretty pleased, too.

How about you? Tried any new recipes lately? 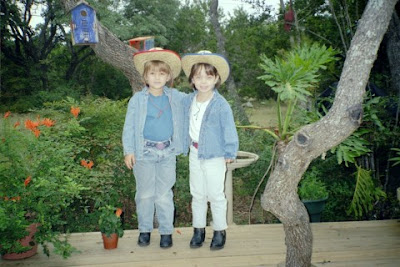 Beware the Ides of Twinness.

Because it's a guarantee. One of your twins will beg you to get braces. You will spend fifteen minutes at the dinner table explaining the many reasons why she does not want braces.

And then? The other twin will be told she needs braces. And you will spend fifteen minutes during the car ride home explaining mom doesn't always know what she is talking about the many reasons it's not so bad having braces.
13 comments: