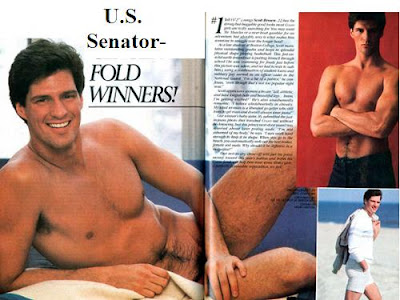 Aaryn Belfer can rant like no other. And today's post was no exception with her 12 things she's really friggin sick and tired of. To include liars (yeah you, Rudy and Dana) and overly vain, surgically addicted fame-seekers (Heidi).
Me? I'd like to add my humble #13. Or make that #12, as I don't have a grudge against those cute, cuddly Pandas.
So here we go. Here's what I'm really friggin sick and tired of: so-called independent and swing voters who decide elections.
Because I have to ask: Who are you people, really?
That one year you can vote for the Bushie gang and the next election year Obama and now this year Scott "I posed naked for Cosmo" Brown?
I mean really, Massachusetts? You lose The Lion and you replace him with Beefcake Boy because he drives a fancy four door GMC Canyon pick up truck? I know this kind of down-home-boy fakery works in Texas elections, but you too?
And why is it that posing nude tends to work against women running for Miss America but works for men running for the U.S. Senate? WTF is that about?
I really do believe wonder if some people register as Independent so they can be the darling of the politico media. As in, I don't get enough attention in my real life so I'll call myself an Independent so exit pollsters will put a microphone and camera in front of my face so I can toyingly make them guess who I voted for.
This is not a game, people.
Did you not see what 8 years of Republicanisms did to America? To the stock market? To the banking industry? To people's homes? Jobs? Lives?
I guess you Massachusians are about as hard headed as your state is hard to spell.
You say you want to send a message to Democrats that you don't like how they're running things. Really?
Lesson 1. Brown's seat certainly means more Congressional stagnation, not less.
Lesson 2. Years of Republican regulation-ease led to financial near-collapse. Or have you forgotten already? I haven't. My husband lost a great deal of income. Our finances still have not recovered. And I am working longer hours to keep us afloat. I am not able to be the available mom that I was before Bush-face and Dick Vader took my country hostage.
Lesson 3. Recent economic indicators, thanks to Dem-lead initiatives, suggest we just might be out of the most troubled waters. I'd say the Dems are doing a pretty damned good job.
Lesson 4. A good thirty years we've endured a steady stream of steep health insurance premium increases and other assaults on our health care. Experts predict more of the same if we don't do something drastically different. But Republican leadership can only come up with tax-cuts and more tax-cuts and filibusters and no-votes and tort reform as supposed solutions.
Lesson 5. I got news for you tort-touters. I live in a state that passed tort-reform. My premiums have not come down at all. They continue to rise several hundred dollars every year. Some years, like this one, more than $1000. You can read more about how tort-reform "did not translate into lower health insurance premiums for consumers" here.
I can only hope Scott Brown makes good on his campaign promises cough! choke! snort! That he votes in the U.S. Senate like he voted in the Mass. State Senate. A moderate who worked with the Dems.
But it's hard to imagine the current Republican party letting Brown get away with anything short of the right wing red meat spewed out by the likes of Limpballs and Annthrax Coulter.
So we shall see, Mass-a-chew-on-this. We shall see.

Well said, PhD in yogurty! And this does make me think that voters tend to have a bias for men over women. Will be interesting to see how the Obama lobby respond. Hopefully well.

Well said, PhD in yogurty! And this does make me think that voters tend to have a bias for men over women. Will be interesting to see how the Obama lobby respond. Hopefully well.

What infuriates me the most about the MA election, aside from the GOP gloating and the fact that Dems manage to snatch defeat from the jaws of victory on a regular basis, is that MA has universal health care for its residents. So the voters there have said that they have theirs, and the rest of us can suck it.

It is simply not possible to sweep away 8 years of wrong leading in that short amount of time. We need to have more passion and give more time because Yes, we can!

Pete -- You see, the woman candidate driving a truck just doesn't quite work.

hokgardner -- Good point. I want mine too, dammit!

Mone -- Eight years to push a big house over a steep cliff takes longer than one year to push back up and get in proper working order. Still a believer, here, too.

Jenn -- Hmm, small hands. Now what on earth might that mean?

Goddess -- That about covers it.

My #13 is WTF Democrats? You had the sixty and you did NOTHING with it. You should have shoved the public option down the Republican's throats when you had the chance.

Very well said and great post! I completely agree with you and with Jenn @ Juggling Life's comment. The more I learn about politics the more frustrated I get.

Jenn -- No kidding. That's the biggest WTF of all. As in, WTF is up with you Dems who didn't go along with your leadership? Blue-Dog? How about Chicken-Sh*t? You can check out which House Dems voted NO here: http://www.nytimes.com/interactive/2009/11/08/us/politics/1108-health-care-vote.html

Tammy -- It is frustrating. But keep reading, keep learning, stay informed. It's our only hope.

I just don't get it. Polls in MA said that voters thought the HCR law wasn't going far enough (I agree). But why, if someone is upset that Obama and the Dems aren't delivering, would they vote for someone who is determined to give us far far less than even the Dems are?

It will be interesting, though, to see how Scott Brown deals with trying to satisfy the Teabaggers on the one hand, and making himself re-electable in MA.

You should rant more often!!!

Sometimes I think the Dems are like the "good kids" who think if they play nice and do the right thing and try hard that it will all be rewarded and the GOP are the "bullies" who fight and call names and shove people around and intimidate and get what they want.

Time to give up on karma and kick some butt!!!

I was literally heartbroken when I saw the results. Obama has had ONE YEAR! and they think he stinks. EIGHT YEARS of George Bush like it never even happened.

I am thoroughly disgusted by the voters in Mass.

A pox on both their houses.

Hallelujah. I can't even think about this guy because his election feels so unintelligently reactionary.

Thank God I clicked on your blog after torturing myself by being "open-minded" and reading two horribly conservative blogs. I actually felt sick to my stomach. Your comments about tort reform are especially interesting.

I hate to sound all Religious Right on you but, Amen, sister! Well said.

Thanks for checking out my www.EightDaysToAmish.com. Great to make a new like-minded e-friend.

Laughing at the difficulty spelling Massa--whatever, it was funny and I can relate. I like finding funny, poignant bloggers.

Great rant. You took all the words I think and put them in the perfect order.