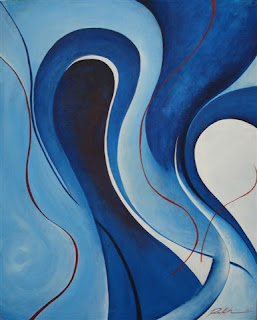 What are the odds of reading two novels, back to back, with the same unusual and unexpected ending?

In the first, a person fakes his death and moves to a particular southern state that shall remain unnamed.

Synchronicity
by Ruth Schembri
In the second? A person fakes his death and moves to a particular southern state that shall remain unnamed.
And yes, the very same state.
The setting of the first book: New York City and New England. The second? England.
The first book I acquired from a neighbor. She gave it to me saying she couldn't get through it but thought I might like it (I did).
I wonder what this says about our friendship. Here's a book I hated. I think you'll like it.
The second book was sitting neglected, on my bookshelf, for nearly a year because I had regretted buying it. Not my usual fare, I wondered what the heck was I thinking. Book buyer's lament.
So late on this one night, after finishing the first book, I wandered to my bookshelf and reached for this second, unappealing one, thinking "This ought to put me to sleep."
In other words, no connection between the two books. Complete random coincidence that I selected two books with identical endings.

The Goddess of Synchronicitous Endings guided me there, apparently.
And I wonder what this means, too.
Is the universe talking to me? Should I be thinking about faking my death and moving to a particular southern state that shall remain unnamed?
Or if my husband suddenly disappears? I know where to find him.
How about you, reader? Has this ever happened to you? Two books, read back to back, with an eerily familiar theme or ending?

Spooky! This has never happened to me. But I gotta tell ya, I have "synchronicity" by The Police on the brain now. Do you?

Never happened to me! What fun :)

that is pretty random. I don't think it's happened to me.

Although I loved them all.

Crazy stuff! Like your other commenters I can't recall that ever happening to me either! They sound like intriguing books though!

Sometimes this synchronicity happens to be but not always quite as literally as your example.

For instance, I was reading the novels of one upstate New York writer, full of evocative local color, and then I discovered a painter from that part of the country I'd never known before, whose paintings EXACTLY matched the book I'd just finished reading.

And I love it when that happens.

I don't know if it has ever been quite so blatant, but I do seem to pick out books at the library (mostly quickly and by cover and quick perusal) that end up being similarly themed.

That is so odd! No, never happened to me.

No, not that I recall. But it's freaky nonetheless!

I did just read a book that had the biggest surprise ending EVER. Totally not expecting it, out of the blue.

Not sure if I have, but I'm a big fan of synchronicity. Very cool...

Wow. That's a crazy coincidence. Kind of like when movies like Deep Impact and Armageddon are released at about the same time. Kind of.

I can't recall ever reading two in a row, but I've sure read books that gave me a deja vu feeling all throughout, only to finally remember what other book seemed the same.

Freaky! I have some oddball things that tend to follow me around though. Like the time... Seems whenever I glance at the clock, it reads 12:34 - doesn't matter what my evening holds in store for me, when my head hits the pillow, more often than not it's that exact moment. During the day, I'll be working or running around doing errands, and yep, 12:34. It's starting to unnerve some of my friends who know about it too ;)

And thanks ever so much to your friend Sherry, for putting "synchronicity" in my head. No really, thanks. :Þ

You make me laugh.

This is like, um, when two people blog about the same thing on the same day (not that we did, but, em, it's happened). Weirdness.

And take your neighbor's handing over the book as a sign of respect. She knew you were smart enough to get through the "tough" read.

One night my husband and I were trying to remember a line from a Warren Zevon song. We hadn't uttered his name but once or twice in 20 years. I then sat down to start a new book and the quote in the front of WAS THAT SAME LINE by Warren Zevon. I think it was something about guns and divorce. Hopefully it meant nothing.

creepy! no, never happened, but now i badly want it to haha..give me the names of the books hehehe :)

Your blog came up in a google alert for the term synchronicity. Hope you'll check out our blog on the topic.

There's something of a synchronicity for me, finding your blog. My daughter is coffee yogurt addict and has been since she was, oh, maybe 2. Have never known anyone else who was!

A new forum has been set up to record and hope to understand these coincidences, or 'synchronicities'. Please consider posting your story on there:
http://synchronicityfilm.com/forum/