my love affair with jeans 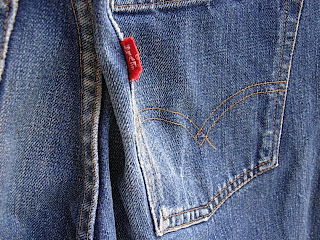 I'm pretty sure my very first pair of official blue jeans were hip huggers. The hippie version of today's low rise. I was probably eleven or so when I got them. I remember the feeling as I wore them. Hip. Cool. Seventeen.

At some point in junior high I graduated to my first true love: Levi's. I wore them until I wore them out. They came in blue denim, brown corduroy, and painter pants white. Their versatility kept the love affair alive.

But then along came their first true rival, designer jeans. When the first designer jeans ever were introduced, Jordache, I was a high schooler. The mass marketed designer clothing thing was new, let alone in something as basic as denim. But I was not tempted. I thought they looked ridiculous with their dark blue, even, un-faded look, their tight clingy-thighs and their little pockets embroidered with swirly-bobs. I couldn't take them seriously and besides, my mother couldn't take their price. So I remained faithful to Mr. Strauss.

Long about my junior year in college I succomed to the designer temptation, however, to the siren call of Calvin Klein. 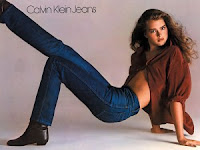 And for awhile, nothing came between me and my Calvin(s). But ultimately I returned to the loose legpants of Levi. Pre-shrunk, button-fly, orange-tag, red-tag, acid wash, light wash, 501's and 504's. I loved them all.

The next greatest blue jean revolution for this woman suffering through the waist-pinching, post-childbirth phase of her life was stretch jeans. And when Levi's came out with their version? I fell in love all over again. For the first time ever I could tolerate tight fitting jeans. I'm not sure anyone observing my evolution from behind was pleased, but I sure was.

Which takes me to now. The latest blue jean phenom appears to have hit the airwaves. 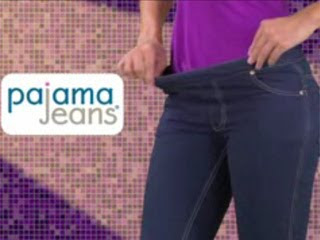 I saw them the other night in one of those tacky television commercials on cable, while, as it happens, I was stuffing my face with a juicy burger and fries. It's only fitting, if you think about it.

But really? If jammie is the future of jeans? I am filing for denim divorce.

Until then, Levi's? You are safe.

Disclaimer: One night after I wrote this post, Stephen Colbert did a segment on Levi's (scroll to 1:52), another example of my common experience with synchronicity. Or maybe the staff at Colbert Nation are running out of ideas and have taken to peeking at unposted blog posts.

Email ThisBlogThis!Share to TwitterShare to FacebookShare to Pinterest
Labels: jeans, this and that

Surely the apocalypse is nigh.

No. Why can't they just leave jeans alone. And what is with the trend to wear pj bottoms EVERYWHERE? I hate it when I see people in the store wearing pj's. How hard is it to pull on a pair of jeans or sweatpants, for goodness sake.

I have a love/hate relationship with jeans. I love wearing them, but I hate shopping for them, which means I rarely get a pair that fits correctly.

And when I first heard about pajama jeans, I thought for sure it was a parody. I was horrified to find out they were real.

I have a love/hate relationship with jeans. I love wearing them, but I hate shopping for them, which means I rarely get a pair that fits correctly.

And when I first heard about pajama jeans, I thought for sure it was a parody. I was horrified to find out they were real.

I love my jeans--I think jammies and sweats are NOT for hard labor OR for public presentation. But jeans? They go with everything.

Do people really need to be wearing jammies out in public?? Ugh... as if people aren't slovenly dressed enough. Although I suppose if I had to pick between seeing a mom in penguin jammies at the school gates or jammie jeans,I guess I'd prefer the jeans. Maybe the marketers are onto something there?

June Cleaver Nirvana actually took one for the team and ordered a pair. What a nightmare!

I am a Gloria Vanderbilt gal myself--Costco sells them at a reasonable price and I can wear the average ones with heels and the short ones with flat. Done.

Yes. Jeans. Really, it's all I ever wear.

I am a blue-jean guy. Wear them daily. If I am not cremated, I will be burried with a pair on and a t-shirt. But I am not picky. I'll wear any brand from Wal Mart brand to Levi's.

Ah, I was strictly a 501 button-fly non-pre-shrunk gal for some 20 years, but now I have to wear mom-jeans, the Not-Your-Daughters-Jeans brand with the (I hate to say it) Tummy-tamer.

Sigh. I still have a pair of perfectly worn 501s in my dresser drawer. Will I ever fit into them again?

I confess to walking the dog in my jammies sometimes, at 7 am. With a coat on.

next up? denim muu muus

Isn’t it amazing how life rhymes sometimes? Now that I live in the mommyhood I wear jeans nearly every day. But I agree the line should be drawn at pajama jeans. That’s just a bit much.

My faves from my teen years were called Levi's Pantomime... they were the best fitting jeans EVER. I probably couldn't get a leg into them now, but remember them fondly. They were form fitting, and went so perfectly with my sweetheart neckline t-shirt, corduroy jacket (with leather patches) and stilettos. An entire lifetime ago... *sigh*

P.S. forgot to mention big BIG hair. And ewwww to Jean jammies. (or anyone wearing pjs past the front door of their house) Some lines should never be crossed.

I am a hold out on the jeans thing. I have never had any that fit me and I don't find them comfy. Even I know that pajama jeans are just going too far!

I love jeans more than any other clothing item. Every day!

I am so old. I was watching television the other night and a commercial for jeggings came on...(jean leggings things) and i thought to myself..."Well, that sounds like something interesting..."

When I mentioned it to my 12 old daughter, she was horrified beyond words.