hillary and the nonconvertible truth

I heard her apology the other night on the televised Philadephia debate. Which was good of her to offer and I accept it readily. Because I know that as years go by, the details get a little fuzzy. And generally, we like to reminisce about things in a way that improves the story.

I've been thinking about this from the start of this Bosnia Blunder. A recent email from a friend illustrates my point perfectly. She was recalling a time when she flew down to visit me from NYC where she lived at the time. We took a long drive out in the Texas Hill Country, winding up in Luckenbach. The place that Waylon Jennings made famous in the song by the same name. Her email said,

1. The car wasn't a convertible. It was a '57 Ford Fairlane. Here is the actual car, on the very day of our road trip. A cool old car, but not the convertible version. Not as cool as that. 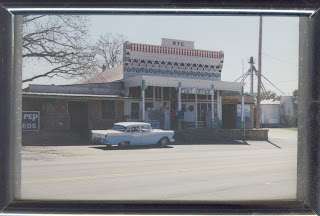 2. We didn't see Willie there, at least not the living, breathing Willie. There is a lot of Willie paraphrenalia about the place, and reverent Willie-talk among the visitors, as it used to be a favorite hangout of his and others in the "progressive country" movement. So we did technically "see" Willie, but didn't see him singing with his guitar (which she was implying in the email, as we were talking about the Stones and other concerts we saw together way back when). We did sit on the grass at Luckenbach, along side the creek, listening to a guitar picking, cowboy-hat-wearing, boots-tucked-into-pants songwriter sing "Down by the Aquiferrrrrrr." Sadly, very much not Willie. Below is a typical day at Luckenbach. Cowboy hats and guitar strumming. But no Willie. 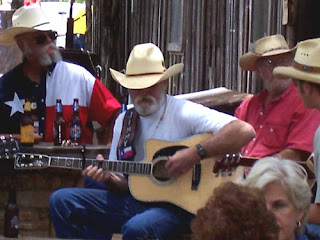 So while Hillary made a major gaffe, I don't think its necessarily a deliberate misconstruance. She very well may have done what my friend did and what I undoubtedly have done myself. Remembering it better than it actually was. Remembering how it could have been, or in Hillary's case, how we feared it might turn out.
I talk a little bit about this on an earlier post about the slippery effects of memory as years go by, here. Eventually, the way you talked about it last time, becomes how you remember it.

Memory. A strange thing in its selectiveness during periods of time.

I haven't really been paying attention to that particular story that closely. I just assume that all politicians lie, whether I like them or not. They are gonna lie. But, what I had guessed had happened was that they prepped her and prepped her about the dangers going there before she left: "There could be sniper fire...we might have to ______ because of sniper fire, etc...." And for some reason, that was very scary thus salient for her and that was the first thing to come out of her unconscious when she spoke about it. But, like you said, I think we all do that to a certain extent to make our stories more entertaining.

ann, that's how I see it. Hillary supposedly made this bosnia blunder a few times .. 2 or 3. These politicians and First Ladies make so many trips, I imagine its easy to blend fact and fiction. Although gunfire is a bit of a stretch to conjure. But yes, I wonder if she didn't get a lot of warnings from the Secret Service, etc, about potential. And with her daughter there, it would surely be a scary possibility.

i agree with you entirely!!
she absolutely remembered wrong ...
there's also no way she'd intentionally lie about something like that which was obviously well recorded for posterity!

That's what I was thinking, e. It just seems odd to be in front of a large crowd that is being recorded, to deliberately lie about an event that was recorded.

Yes - memory is slippery. It's fascinating to watch my daughter grow, and to see what she remembers, and how. She's four and a half.