I have a long history of shoes mattering.
When the 8th grade Basketball Boy wore these

I wasn't interested. This was the mid-70's. Chuck Taylor's were not high fashion. They were just what boys wore. On the right shaped feet these shoes looked okay. Wide feet, high instep. Basketball Boy's feet were long and skinny. Made his toes curl up in front, like elf shoes.
But the next year, when Basketball Boy wore these 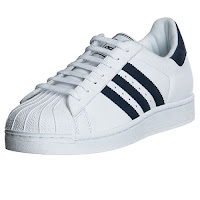 I was all over that. It was heartthrob city for five years.
After Basketball Boy came Bartender Man. I don't think I ever saw bartender man in a bad pair of shoes. Bartender man lasted five years. We did not end because of his shoes. We ended because he took off his shoes under the wrong bed.
After Bartender Man, came Mechanical Engineer Man. ME Man had decent enough shoes when I met him. But one evening he picked me up for a date wearing shoes such as these 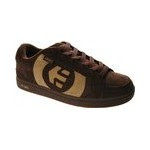 For the record, this is not the exact shoe. This is a brand name shoe. ME Man's shoes were generic. The type of shoe the boys in high school wore who hung out in the smoking corral. Rust brown suede. Dark brown laces. Gum rubber sole. And Members Only jackets. The exact shoes I'm thinking of are not for sale on the internet. And I'll tell you why: Men who bought these shoes did not reproduce in great numbers.
But I continued to go out with ME Man. I was not going to reject him based on his shoes alone. I was better than that. Besides, we were in graduate school. Money did not flow freely.
At least that's what I thought initially. Soon I learned that money did flow freely in his world. He pulled up the carpet in his spare bedroom closet to reveal this

I knew he liked to partake of the ganja. I now knew he was putting himself through school with it. This was even less cool than his brown suede shoes. But at least there was hope. For better shoes.
Graduation day came. His masters degree. His mother and stepfather came to see him cross the stage. We met for lunch afterwards. I liked his parents. A lot. Nice looking, friendly, smart, well mannered, well dressed people. Everything was coming together. Maybe this guy could be the guy. And then I glanced down at his feet under the table. He was wearing these

Bedroom slippers. Vinyl bedroom Romeos. ME Man walked the stage of a major university with vinyl Romeos on his feet.
No, this would not be the guy. He would no longer be A guy.
After ME Man I moved up to doctoral-candidate-Chemistry Man. When we started hanging out, it was summer time. Everyday attire was shorts and flip flops. You can't really judge a guy's footwear by his flip flops.
As the fall came into full swing, I noticed Chem Man didn't have any tennis shoes. You know, the white leather sneaker standbys that nearly all guys wore in the 80's. But in Texas you don't say sneakers. You say tennis shoes.
Eventually I asked Chem Man about his lack of tennis shoes. He didn't own any, he said. Why? I asked. Because everybody wears them, he said.
He also did not own a pair of jeans. That's right. Because everybody wears them.
Now, if there's one thing I absolutely love on a guy, it's blue jeans. Preferably Levi's. I lurrve me some nice man ass in a pair Levi's.

That was for the ladies.
And the guys who are also into man ass.
But back to Chem Man. We were both in the poor-graduate-student boat. Chem Man lived on a teaching assistant stipend. No cash stash in his spare closet. I wasn't going to fire a guy because he didn't have the right shoes. Or pants.
But then he showed up at my job. Wearing something that resembled these 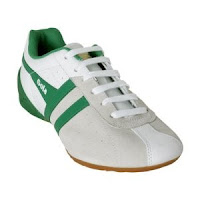 Only instead of green stripes, his tennis shoes had a light blue knock off Puma swoosh that looked like a dolphin silhouette.
I couldn't resist asking him why he bought the dolphin shoes, why the sudden change of heart.
I didn't buy them, he said. I found them.
Found them?
Found them on the beach in Galveston. Abandoned. Not a soul around for miles. So I took them.
Oh so, shoes that everybody wears are okay as long as they are found and not bought.
Chem Man told me about his found shoes while sitting across from my desk. I was working at a private psychiatric hospital. The admissions clinician. Chem Man sat in the very spot where severely disturbed individuals signed their psychiatric admission paperwork. Psychotics. Paranoids. Schizo-affectives. Chem Man with his abandoned dolphin shoes and twisted fashion philosophy.
The irony did not escape me. Chem Man was soon history.
So what of the shoes of the man I married? What manly footwear captured my matrimonial M.O.?
To be continued.

So far, so funny. Eagerly awaiting the conclusion...

You crack me up with the shoes... but i am a guy shoe snob too. The slippers would have put me into a padded cell. of course i married a black leather lace up sketchers kind of guy. Not too young, not too old fashion. He also draws comic books for a living and wears t-shirts and jeans to work... Feeling like I shouldn't expect to much.

I meant "too" much. Obsessive?

Slippers? I don't think so.

What about socks w/sandals? Deal breaker for sure.

sherry -- call me strange, but I do like me some socks with birks. especially those ragwool kind. but white athletic socks with, say, tevas? nuh-uh.

This is hilarious. I don't care too much about men's shoes though I will say I'd never never never consider a guy that wears the Euro elf shoes...the ones that are pointy toed and curl up at the end. Barf. Who could possibly think that is attractive in a manly way?

Oh this is good. Mine would be all wallabies. Followed by docksiders and Bass weejuns... I think you're on to something here!

Oh hoooo, can't wait for the conclusion of this one! My husband wears runners (what we call tennis shoes or sneakers the up thisaway in part of Canada) and doesn't own a single pair of flip flops (nor do I) and I'm pretty sure he's never stolen a pair of shoes from someone who was probably swimming (haha)

By the way, Doc, I have a cocktail and award to share with you, if you'll mosey on over to my place when you get a moment...

Alrighty, part of that last comment made no sense whatsoever. Apologies for the brain fart.

Oh what a fun idea for a blogpost!

I have to say that I never notice men's shoes although I think I would probably notice the slippers but not in a positive way.

I am a bit like Chem man. I will wear anything if I find it or if someone gives it to me but I too hate wearing or doing anything because everyone else does it. It can be a real nuisance when I actually really like something that everyone else is wearing but my stupid stubborn nature won't let me buy it.

I shall pay more attention to men's shoes from now on. And yes, definitely tennis shoes rather than sneakers!

A man and his shoes. I'm hoping that you are above reproach here. I'm thinking that any man who has a shoe philosophy is a problem. I guess chem man is in the right field.

Love it. I can't wait to hear the rest.

Very true - what an interesting barometer for men!! i'll have to go back and review my mens' history of footwear.

I will say that the man I married, who I love dearly, has a couple of poor shoe choices, including Birkenstock sandals. He also has some perfectly fine Ecco black walking shoes that he has had the unfortunate tendancy to wear with white socks and shorts while hiking.

but I love him. Love is blind.

I notice shoes on a guy too! Those slippers?! Horrible. Can't wait to hear/see more.

I have been laughing about these shoes all evening - can't wait for the rest of the story.

Oh dear, you've left me hanging. I'll need to tune back in for sure! My sister, who is quite particular (and is 53 years old and never married) once had a blind date with a guy who showed up wearing clogs. Apparently he was history before hello.

I am laughing, it's early and I haven't eaten. I have always had "shoe" and "feet" issues with boyfriends, and not sure I even recognized even part of the full significance of it in determining my future until just now. Look forward to hearing Part 2! Hilarious :)

NOOOOOOOO, you can't make me wait! This was building to the payoff...

And I really wish I'd written this post. It uses the BEST conceit.

Oh no, a cliff-hanger, not fair! I'm betting boots (not cowboy). Manly boots.

Shoes are probably as good a criteria as any. Better than hairstyle or type of car. Maybe not as good as music...

This one was too much fun.

Awesome post. Loved the essay's thematic consistency of "We ended because he took off his shoes under the wrong bed."

My man wore an incredibly cheesy rust colored leisure suit on our first big theatre date. Can't remember the shoes, but I have photographic evidence of the suit to share with the world in case he ever wanders toward the wrong bed.

I need a moment alone now.

Clogs? Are they going to make an appearance?

yeah...i'm going to say hiking boots...with those gray socks...and hiking shorts...toss in an Australian outback hat and oh yes...very nice...i'd follow that up a mountain any day!

this post totally made me smile this evening...now i'll dream of old boyfriends and try to see their shoes.

Two-toned shoes is a no getter for me.
Funny post.

i would like to share more information tReds uk company which produce shoes for men and women.

Not So Simply Single said...

Very cool...one of your friends told me to read this post.