can you find the roadrunner? 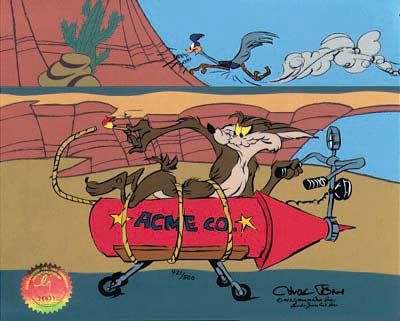 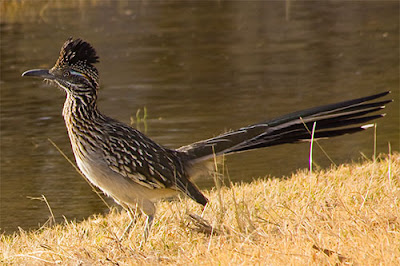 This kind.
The real deal.
Geococcyx Californianus.
I've lived in Texas for over 25 years and have only seen a handful of roadrunners. The first one I saw was in Big Bend National Park. Sam and I were vacationing, no kids at the time (what? is that possible? a vacation by ourselves? surely I dreamt that up). We were walking up one of the many trails and between us walked a huge roadrunner. Friendly guy, he came within a few feet of us and let us admire his long tail and brown spotted plumage.
Fast forward to the past few months. We've been spotting one in our yard, again and again. The next door neighbors have, too. We've all been wondering what's up. 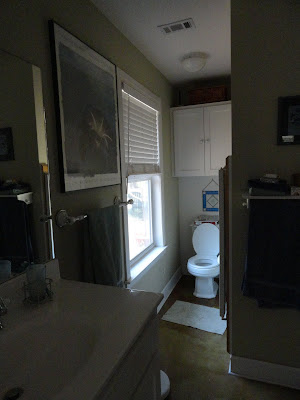 Wonder no more. Sam was sitting in the throne room one evening recently, looking out his window to the magic kingdom that is our backyard. The window he insisted on designing our master bath around. It was one of the few features of our house that he was adamant about. He wanted that passenger side view.
He saw our roadrunner scuttling up a stand of Live Oaks trees. When he left his observation post, he went outside to see where the roadrunner was headed. He spotted a nest.
In all these years, I assumed roadrunners were ground nesters. Turns out they nest in cactus, low bushes and short trees.
Here's another factoid I was very happy to read:
The roadrunner eats anything it finds, such as scorpions, lizards, rodents, and other birds. It is one of the few birds fast enough to prey on rattlesnakes. It attacks a rattlesnake by grabbing the snake by the tail, and snapping the body so that it beats the snake's head against the ground or a stone until the snake is dead.
Having just had dinner with friends who told me their dog was bit by a rattlesnake, I hope the roadrunner sticks around and rears up many little ones.
See if you can find the roadrunner in her nest: 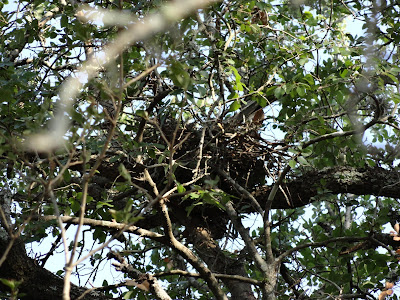 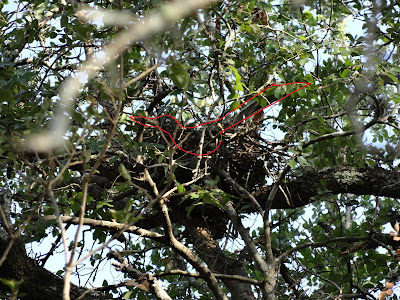 I tried to get closer. If you don't believe me I've got a fire ant bite on my middle toe to prove it. By the time I swatted the fire ant off my foot, I looked up and the roadrunner had taken off.
We've since learned they lay as many as 12 eggs but typically only 3-4 live to make it to the ground. They will be parented for two weeks and then they will be on their own.
We can't wait to meet the baby roadrunners and introduce them to our other exotic backyard bird family, 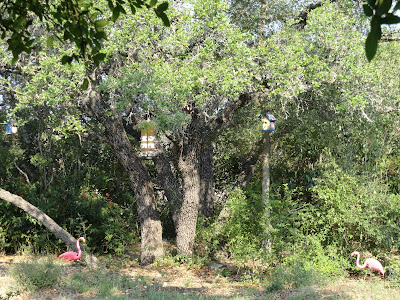 Mr. and Mrs. Flamingo.
Update: Approximately three weeks later Mr. and Mrs. Roadrunner appear to be the proud parents of baby roadrunner chicks. We don't know how many but we see proud momma and papa running back and forth from the nest carrying darling little gifts of lizards and other foodstuff. We are waiting to see the chicks hopping around on the ground and hoping to get pictures.

It's cool that you have access to wildlife like that. I'm looking forward to it when and if we move to the country.

Super cool! I've never seen a Roadrunner in real life. Fascinating they nest in trees, I would have thought they nest on the ground too. Love the throne passenger window!

First, a vista from the throne Way cool!!! Beats an ultra huge high def TV in a man cave in my book any day. I grew up in NM and watched a few of those clever birds. One was a resident near the office where my dad worked for the Gas Co. He would show up in the eve when the service trucks had returned from their rounds; all with a grill full of recently deceased bugs and grasshoppers. It had a private buffet every evening all summer long.

We could use a rattlesnake killing bird around here too. Congrats on your new bird friends.

Wow--that is some camouflage. I've seen a few in the desert, but never close to home.

I've never seen one except in the cartoons, but then I guess they don't live in Georgia,either.

I simply cannot see birds in foliage. It's almost comical, my friends will point and go -"look, he's right THERE" and I still can't see.

I did see a roadrunner once, here in Topanga, up on a hillside by a road.

I've never seen a Roadrunner before! It looks cutter though in the cartoons. It's awesome to be able to see Flamingo in your backyard :)

I've always loved road runners and now I'm jealous of that bathroom window. Stripey cat's box has a open front. It appears she was just as adamant as Sam about that feature. I call it 'reading the paper'. It's so endearing she just peeps out do her thing.

I wonder if your road runner feels the same thing about Sam's peeping?

I love having birds nest close by so I can watch for the babies. So cool. I am sure the flamingoes were a reason for choosing your yard as a new home.

Wow... I didn't see her initially... I'm glad you outlined her shape!!

I did know that they do kill and eat rattlesnakes... so they are great to have around!