beating those kids who think they are so damn smart

I have just found Crystal Jackson's blog, Fight stupidization. Her recent post talks about Delaware Senate candidate Christine O'Donnell's campaign commercial.
You know the one: "I am not a witch. I am you."

Jackson rejects the notion that the Average Joe is the best man for the job. But it's a question worth asking: Why do (so many) voters find the Average Joe so appealing when it comes to electing them to high office? Even the office of presidency? When what we need in the White House or in the Senate is someone who is not just smart, but very smart. Someone who, as Jackson says, can "pay attention to intricate, ever-changing details."
Back when Shrub was elected, pundits and pollsters said many voted for him because they'd like to have a beer with him. I don't know about you, but I can think of a lot of people I like having beers with who would make very dangerous Presidents.
But as much as I hate to admit it, the right wing message crafters seem to have nailed it in their persistent way of manipulating the subset of the voting population that holds contempt for intelligence and fact wielders.
I often wonder if this doesn't stem from days in the classroom when deep resentment arose toward that kid who sat front and center, raised her hand for every question and knew the answer every.single.time.
Getting good grades is probably the single most cohesive goal of parents in any community, of any color, of all sides of the political spectrum. Kids who are average, or worse, find themselves semester after semester unable to distinguish themselves with high marks. Find themselves standing in front of disappointed, or worse, punishing and belittling parents. Who eventually trade in their humiliation for a major case of contempt.
So I often assume the appeal of the Average Joes and the Common Folk Christines is more about getting even with those know-it-all over-achievers. Letting the long-ago-but-never-forgotten feelings of inadequacy get the best of their voter sense. Finally taking aim and wielding some control over those kids who think they're so damn smart.
I don't know if this is at all close to what is going on. I just know that recent campaign trends depict the brilliant as suspect. Ivory tower as out of touch. Top of the class as contemptible.
And maybe because in the White House we've had on the Democrat side:
-Carter, top 10% of his class in the Naval Academy.
-Clinton, a Rhodes Scholar.
-Obama, Editor of the Harvard Law Review.
And on the Republican side:
-Reagan, an actor.
-Bush, a yell leader. 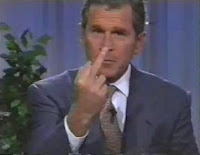 I like this. I always wondered about that too. I don't want someone like me for President. I want someone smarter and kinder! :o)

Thanks for visiting my blog and introducing me to yours. I have lots of fun reading ahead of me.

I think you are right on target with this one. Personally, I want the people in charge of the country to be way smarter than I am, and I'm pretty damn smart or at least smart enough to know that I'm not near smart enough to be president.

Oh you are singing my song!

When people liked Palin because she was "like them," I was screaming--"No! I want someone so much smarter and better than me!"

Then again, I was that obnoxious, hand-waving kid.

When a good education, including college, is truly an option for everyone, maybe this age old conflict will fade. There seems to be nothing but disdain from extremes on both sides toward the other.

* Me, a witch? No, but I was almost born on Halloween.

I am so with you on this one. I want people with more brains and integrity and heart than religion, toughness and the common touch.

Did Dawn send you the link to Crystal's blog, or is this a weird random coincidence? Her brother was a good friend of mine.

I have wondered the same thing when Palin was suffocating us all with her average Joe stuff.
I can't fathom why having an average joe as president would be appealing to anyone.

You wouldn't want me as president... fortunately I'm Canadian, so it's never going to be an issue. I know, you're devastated, right?

I am an ...itch of some sort ;) And I brought my eldest home from the hospital on Hallowe'en day with teensy pumpkin slippers on, and referred to her as my Little Ghoul. Does that count?

What an incisive bit of analysis here, hon! I am sickened, too, by the Lowest Common Denominator to selecting our public officials. Terrific writing.