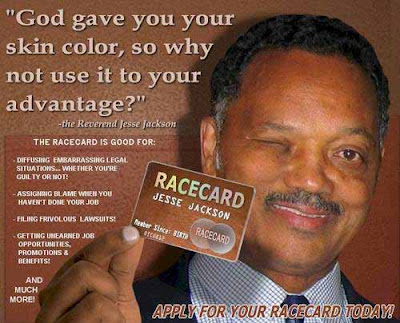 It wasn't a matter of if, it was a matter of when the McCain camp would accuse Obama of using the race card.

The when became more and more inevitable with McCain's sinking poll numbers.

From the LA Times article:

The exchange, which elevated tensions in a contest grown increasingly testy, arose from comments made by Illinois Sen. Obama at a stop Wednesday in rural Missouri. The Democrat said Republicans would try to scare voters by questioning his patriotism and "funny name" and by pointing out he doesn't "look like those other presidents on those dollar bills" -- all of them white and, except for Ulysses S. Grant, older than Obama when elected to the White House. In response, Rick Davis, the manager of McCain's campaign, issued this statement Thursday: "Barack Obama has played the race card, and he played it from the bottom of the deck. It's divisive, negative, shameful and wrong."

Speaking to reporters after an appearance in Wisconsin, Arizona Sen. McCain said he agreed with Davis' statement, adding, "I'm disappointed that Obama would say the things he's saying."

That's negative and shameful?
Really?
And yet, McCain's earlier remarks are not? Such as stating that Obama "would rather lose a war" in order to win the election?
No. I suppose not. Not when you're John "I make up the rules as I go" McCain.

It's not shameful, of course, because he's not questioning Obama's "patriotism." See McCain's interview with George Stephanopoulous at Professor J's Place.

And one more point of incredulity. During that interview, 4.18mins in, in reference to the Iraq war McCain actually said, "We were greeted as liberators."

Huh? Which war is he getting his updates on?

Email ThisBlogThis!Share to TwitterShare to FacebookShare to Pinterest
Labels: politics

It's all incredibly nasty ass tactics by the McCain sinking campaign. And what about McCain's new ad comparing Obama to Britney Spears and Hilton? What the hell?

I'm with you all the way. I'm heading over to Professor J's, but my crankiness factor is reaching overflow.

McCain is showing how desperate he is. That is just so pathetic of him.

Thanks for commenting mines too!

i had a seven year old girl over today, playing with my child .... and she started telling me about mccain, she's voting for mccain, her mom is, her dad is, her brother is .... everyone is! .... i said, ya know, sorry to disappoint you, but i'm not going to .... she said WHAT .... you're going to vote for obama even though he has a girl name?

empress - pathetic is a good word for it.

e - don't let the mccain campaign hear about it! they'll be ALL OVER THAT. haha. it is funny tho.

Speaking of McCain's campaign blunders, have you seen Kathy Hilton's response to the 'celebrity' ad published today on The Huffington Post? Indeed, before you slam your opponent by implying that he is vapid and empty like a high profile celebrity, make sure the celebrity's family isn't one of your generous campaign contributors...

I want to throw things at the TV when McCain is on these days.

I've been tuned out recently, not listening to campaign news & whenever I tune back in, this is the crap I'm rewarded with.

madge - however many, it's that many, too many

heather - I have not. Thanks for the heads up. Making me snicker thinking about it.

jenn - I'm with ya. Rolled up socks are good for this.