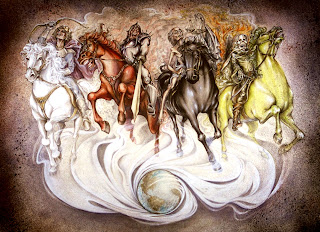 One book I really, really like to recommend for couples, one that has helped me in my marriage, probably more than any other, one that my husband buys into (important) is The Seven Principles for Making Marriage Work by John Gottman, PhD. It's very easy to understand. He uses very common everyday speak. Its largely research / outcome /evidence based advice (instead of touchy feely abstract unituitive bullshit that leaves readers feeling good after they finish but without any explicit tools to apply to their relationship to have any true lasting impact). The book deals quite a bit with anger and how the degree of anger can negatively impact a marriage, whether its externalized - such as yelling, stomping, having an affair; or internalized - stewing, turning away, silent treatment, self blame, martyrdom.
The portion in the book I refer to most often and use myself are the "four horsemen of the apocalypse" -- four things to strive daily to eliminate from your relationship:

1. criticism (i was a big abuser of this one, dh never criticized me, but I frequently would phrase things in a way that clearly says he is defective in this or that way, instead of phrasing it that i wish he would do this instead, or I would like it if we did this or that)
2. contempt (again, moi, always saying things with a shitty tone)
3. defensiveness (dh -- super defensive, no matter what I brought up he had an over reaction and we got lost in defending and counter defending)
4. stonewalling (shutting down verbally, refusing to talk, walking out or storming out, staying gone... again, hubby's schtick, he never wanted to talk about ANYTHING that smells of conflict)
Gottman has been doing research on marriages for more than twenty years, looking at what helps marriage last and what is associated with divorce. He's been able to predict what factors are most likely to bring a couple to divorce court and excessive anger is one at the top of the list. Myself, coming from a family with a lot of anger, I was often looking for validation that anger is healthy, anger is good to express. This book cut right through my justifications and helped me prioritize expressing my wants and preferences instead of my discontent. It helped show dh that disagreement is healthy. In fact, Gottman points out that marriage with the least amount of conflict are also at risk. Conflict is natural. Communicating in a healthy way isn't always natural and easy. In a world full of marriage books, this one is a keeper.

I've read one of Gottman's books (can't remember which one) that discussed the same concepts. Unfortunately, I wasn't able to get my ex-husband to read it until I was pretty much out the door! Gottman has a gift for using research to explain how to improve a relationship in ways that seem manageable. Not that it's still not hard as hell to change, but definitley at least it's clear what you need to do.

hey shanzy! thanks for posting : ) yeah, the changing is the hardest part. especially after years of being entrenched in a certain dynamic.

sounds like a great book! thanks for telling us about it.

do you know if there's gender associated with these? which of the four do women use more often/which do men? does Gottman talk about that at all?

I don't recall Gottman addressing this along gender lines. But I would guess stonewalling is more common with men. It definately seems to hold in my practice, the most common complaint from female clients: "he won't talk to me!" Not to say plenty of women don't stonewall. I will make a point to browse the book. I would think contempt would be more common with women, given our propensity to have so much voice tone.

e, will the post it be placed strategically on your bedside .. or his? LOL

I love Gottman! I read 7 Principles back in grad. school. I have also read two other books and would like to read the one about raising an emotionally intelligent child and "Baby Makes Three." I so related to your post because even though I "know" this stuff on an intellectual level, I fall victim to all of those except the stonewalling.

Interesting, makes me reflect on how my boyfriend and I interact. He comments that I am the one who doesn't want to talk, so I guess I need to work on that!

Stonewalling is my least common but must admit occasionally resorting to it. An angry backlash, "I'll show you what it feels like to be ignored" Which is probably more dispicable than your average shutting down. No pride in revealing this, btw. Strictly admitting I have been guilty of using all four.

This sounds like a facinating book and one, like you mentioned, actually gives you tools to work with. I have been married 13 years now, but we can always use working tools. I related to much of your post, personally. All that stuff we bring into a marriage and then if we have children...we have to try not to dump crap on them. Such a journey...

and children, unfortunately, bring their own load of crap. and I ain't just talking figuratively

oh, thank you! the other day i was on everyone needs therapy (i see she's on your blogroll, too - isn't she amazing?) and i just couldn't for the life of me remember gottman's name. old age and all that. so thanks for bringing him up. he's doing great work.

i notice some comments here on stonewalling. of course people use all of these tactics for a reason. someone i know uses stonewalling when he needs time to himself. fortunately, he and his wife figured that out; now she leaves him alone when he acts like that, and he is happy to come back to the conversation when he's ready.

thanks for being so frank about how these horsemen show up in your life. i'd say my biggest one is criticism, used with all kinds of embellishments. (a favourite: "i really don't know why you still don't want to ...") fortunately, my husband isn't bothered very much by it and i'm working on toning it down.

oh, and thanks for adding me to your blogroll!