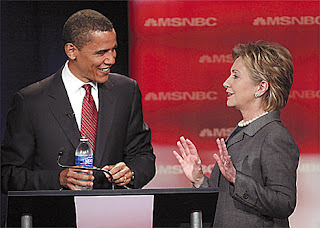 Today I received an email from yet another feminst friend of mine who is an Obama supporter. Someone whose opinion I value. Someone who I was counting on to vote for Hillary. What is going on? Do some Obamers suffer from a fear of flying? Fear of supporting Hillary Clinton, the woman, argueably the single most qualified candidate in the presidential race? Fear that the conjurers of the right wing spin are right? Fear that she can't possibly win because the Hillary Haters will come out in force on election day but will stay home if Obama is on the ballot? I have considered jumping to the Obama camp for this reason. But if everyone voted out of this kind of fear, we'd continually be nominating not the best qualified candidate, but the least likely to lose. Is that who we want in the highest office?
Maybe Obamers fear that Hillary has drifted too far to the center, strayed from her liberal roots. But center-drift is the necessary evil of building bipartisanshp and a successful career in Washington. It doesn't mean she isn't still striving for significant, progressive change. She's just going about it in the slower, conventional way.
More often, though, I think Obamers are riding on the prospect that this promising and largely untested young senator will catapult above the political fray and be the champion of sweeping changes. I have considered this arguement too. And maybe. I hope so too. But I really doubt it. The same was hoped for Jimmy Carter, newcomer to Washington, and look how his four years turned out. Maybe that's why Obama has so many young supporters. They don't remember Carter's humiliating defeats. They only remember Hillary's humiliating defeats, when the young Clintons-Came-To-Washington and bungled health care reform.
So when I learn that another of my feminist friends are supporting the largely untested, albeit inspiring Obama, I'm first shocked, then disappointed, then sad. Come on! This is Hillary! The no-cookie-baking-no-stand-by-her-man-no-retreat-to-humiliated-oblivion-after-bimbo-chasing-husband-humiliates-me Hillary. Yeah, Obama can make moving speeches, but he hasn't DONE much to earn our trust. Ok, he didn't vote FOR the war in Iraq, but how could he? He wasn't there. He wasn't under the gun. He didn't see the (cherry-picked) intelligence. He and Hillary have voted similarly on Iraq related votes since. He has abstained from tough votes, such as the Iranian-Revolutionary-Guard-as-Terrorist vote, only to later criticize Hillary for hers. Do I smell a weasel?
Back to the feminist vote. Yesterday I read bestselling contemporary author and acclaimed feminist, Erica Jong's opinion piece in the Washington Post supporting Hillary Clinton (read it here). Giant relief. Vindication. Joy! Her finishing arguement tells me this feminist has no fear of flying:
"I understand my hopeful friends who think an Obama button will change America. But I'm sticking with Hillary. I trust her because all her life, her pro bono work has been for mothers and children. And mothers and children -- of all colors -- are the most oppressed group in our country. I trust her to speak for our children and grandchildren -- and for us. She always has. "
Right on, Ms. Jong, and Halleh-zipless-fuck-ing-lulia!

Right on! Well said. Hillary is by far the most qualified candidate. Obama may very well pull it off, if elected, but how are we to know? He's great at inspirational speeches. I wish I knew for a fact that those speeches would be followed by action. We can't be certain. Go, Hillary.

just so long as one of them wins!

Hear, hear! This truly is all that matters. The beauty is, I'd be ecstatic with either candidate in the white house. A Clinton/Obama ticket would rock!

Well, I am a feminist who loves Sen. Clinton as my senator. I do not support her for president for a number of reasons, one being that she's pretty much demonstrated that she will do anything to gain and retain power. (I acknowledge that all politicians do this.) There is something unsettling about the way she uses Bill. Her roots are not, in fact, liberal - she attended Wellesley College as a Goldwater girl. She undermined welfare in the 1990s, and I don't like the way she's been softening her stance on abortion rights, as if stating that we should do everything we can do reduce the need for abortion (who wouldn't agree with that?) is going to ensure that women have reproductive control and independence. It's that last thing that finally made me turn my back on her. If she won't stick up for abortion rights, then I don't trust her to stand up for anything that is important to me if she thinks it will get her a few extra votes.

I do want to see a woman president. I just do not believe she is the best candidate in this election.

Regarding the softening on abortion rights, I see it this way: Clinton's stance is a shift away from the Democrats image as "pro-abortion" and is instead attempting to find common ground with voters who are opposed to abortion. We're all for reducing the number of abortions. Its inclusive. Like it or not, the Republican's right wing attack machine has been very successful in dividing our country, you either want to kill babies or you don't. This all-or-none positionaing has let them be successful in keeping their party strong with middle class voters despite the fact that their only true goal is to help reduce taxes for the wealthy. Clinton's approach will help usher the way for pro-lifers to move away from the all-or-none view of the Republican party and help them feel more comfortable voting for a Democrat who is pro-life too, afterall.

As for her roots, she can't help that she was born into a connected Republican family. I don't see that as meaningful, especially considering how far she has come.