a cowboy hat to remember

The other day, Motherscribe was reminiscing about how she met 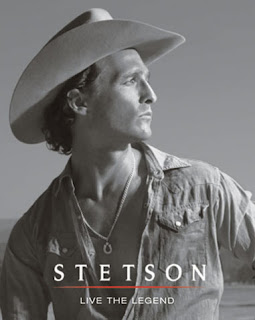 her husband, here and here. Mrs. G at Derfwad Manor was describing a defining moment when she knew that Mr. G was her forever and ever man.

It got me to thinking about the defining moments in the early days of my relationship with Sam, my husband of 16 years. Maybe I'll post about a few defining moments later. But right now I want to tell you about one of the most memorable moments. One of those moments I wondered what in the hell I had gotten myself into.
It was late on a Saturday night, probably 2am. SAM and I had just gotten home from our favorite dance hall, a place we called the "Hall of Shame," or "Shame" for short. As in, "You going out to the Shame tonight?"
Earlier in the evening, like any night at any Texas dance hall, there were a ton of guys wearing cowboy hats. It occurred to me that I had never seen SAM in one, or I didn't remember if I had, and I told him so. SAM was born and raised in Texas. He owned nearly a dozen pairs of cowboy boots. His grandfather was a horse trainer and a horse trader. His father routinely wore a hat (Stetson for most of his life, then a sudden switch to Resistol). So with that background, I knew he owned one. SAM told me that yes, he had owned a hat or two in his lifetime, but that he pretty much only wore a cowboy hat to shield himself from the sun when he was framing a house. He couldn't remember if I'd ever seen him wearing one, either.

So I'm in the kitchen, leaning over the sink, eating one of my favorite late night treats: an egg, potato and cheese taquito from WhatABurger, with lots of hot sauce. Which explains why I was leaning over the sink, to protect my shirt from the dripping. Or, this is how you do it when its 2am and you've had one too many longnecks.
I looked up and realized that SAM wasn't in the kitchen. His taquito was getting cold. Where did he go? I presumed he made a trip to the bathroom.
A few seconds later, I hear SAM say my name. I turn around to find him standing in the doorway, buck nekkid except for a pair of boots and a cowboy hat on his head.
"What are you doing?!?" I yelped, egg and potato dripping down my chin.
Sam replied, "You said you couldn't remember if you'd seen me wearing a hat. This way, you won't forget."
I reckon.

now that is a memory. good job sam.

That's a defining moment for sure.

Um, yeah. I like that defining moment. Great visual.

mrs g -- the visual of my lifetime!

And I'm supposed to go to sleep after THAT story!

It's fun, isn't it, to go back and remember.

Thanks for the lovely linkage. You're on mine tonight for the fishnets query.

Oh gosh, I can almost picture it!

OH.MY.GOD.....is there any question why women love cowboys?

This made me laugh out loud. And his plan worked, too, apparently.

Loving this man - and the visual I got with the story was priceless.

Well now. I don't think I'd forget that, either!

jck -- a lot of fun. thanks for sparking my memory.

femgal -- yep, a nekkid cowboy is hard to beat

onebrick -- not from where I'm sitting

casey -- yes, I have forgotten way too many thins over the years, but not this

mental p -- indeed, it ranks up there

How nice that he had a handy place to hang that hat, as well.

Hey...even I won't forget after reading this post. Are you talking about the Texas Hall of Fame? In College Station?

jocelyn -- and hang his hat, he did

Lol! Great story. I think I need to get my hubby a cowboy hat!

domestic fringe -- every (wo)man needs one!

such a cute story!
now i'll never forget that you've seen him in a cowboy hat either ....

Oh yeah, I reckon! And ditto what e.beck.artist said. Quite a visual...

What a great story!

LOL! Does he read your blog?! I love that story.

annd -- I doubt it. I occasionally send him a post, like the one that featured his old car, many months ago. I will have to send him this one, too. He'll get a kick out of dozens of unknown women imagining him nekkid.

haha I always picture things in my mind!!

Great story. I always forget you are from Texas.

No wonder you married him.

And hands down, egg, potato and cheese taquitos from WhatABurger would be my last meal. Yum.

Now that is a cowboy hat to remember story!

That's a great story! Not sure I will ever be able to look at SAM again without seeing that.

I too remember many nights of Whataburger taquitos after a night at Jitterbugs, the Shame of Nacogdoches.