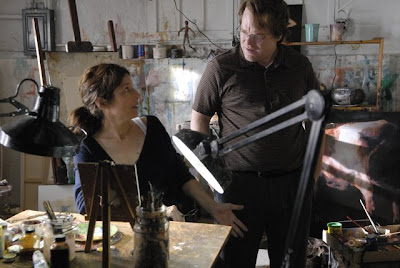 I love Charlie Kaufman's films. Or, at least the three I've seen (that he has had a hand in?) in which he has had a hand.
That feeling of confusion and "huh?" during Being John Malkovich, and then suddenly "getting it, " or at least, some of it. Most of the time. Or, wait, is that, most of it, some of the time? Whichever. I dug it.
With Adaptation, that shudder of recognition in Nicholas' Cage's self-conscious character. The back and forth between the writer's head, the book, and the principal characters he's supposed to be writing about. I loved it. Every.minute.of.it.
Eternal Sunshine of the Spotless Mind: As a psychologist, I can't stop thinking of the possibilities. In the midst of some of my sessions with clients who have been through terribly painful events, I wish I had my own memory erasing machine. And not just for my client.
Today's meeting-of-minds with Kaufman was not a whole lot different. Synecdoche, New York is a wild ride. No, a slow, agonizing, downward cycle of a ride through the psyche of a man, Caden Cotard, who lives his life straddled between regret for the past and dread for the future. Occasionally he lands smack dab in the middle of the power of now and is rewarded by despair, but most importantly, despair that has been validated. That's as close to feeling good as he gets.
The paper where I get my movie listings gave it four-and-a-half-stars. After feeling thoroughly confused by the review, a WTF moment that only certain, gifted movie reviewers can give me, I decided I have to see this. I had no idea what the title meant, even less of an idea after reading Wiki, and even less still again after reading the definition after seeing Snyecdoche. So now you will understand how I felt compelled to take on the challenge of seeing if I too can get it, like the reviewer who gave it four-and-a-half stars. I mean, she must have gotten it if she gave it so many stars, right?
Feeling a little confused? Like maybe you get my review, or at least some of it, but you're not really sure, so now you'll have to see the movie too, to see if you get it?
There. You now have no reason to see the film. You do get it. And that's the feeling I got coming out of the theatre. Or one of about a thousand zillion different feelings.
In essence, I liked it. I want to see it again. So that I can absorb more. Or maybe not. It's a little too depressing to go through it all over again. But it is a fascinating, confusing, snapshot of a snapshot of a blend between one man's neurotic yet realistic worries, the missed opportunities and losses that result, and his experience of what is happening now versus how he is capturing it through his art (in this case, playwriting).
And now I'm wondering, will there be a director narrated version on the DVD? Ooh, I must watch that.
I was mostly enthralled. I laughed a lot. I smirked. I snickered. I chuckled. I recoiled. I felt that uncomfortable, awkward feeling of recognition that Kaufman's movies elicit. Here's another guy who thinks too much in a depressing, dread-inducing, erectile-dysfunction-happening sort of way. Way more than me, but I can relate to enough of his thoughts to wonder just how focked up I am if I see even a little bit of myself here. I am comforted, however, knowing, that I am mostly able to tuck away my neurotic thoughts into one of two files: "I'll think about that one later" or "Let's just forget we ever thought about that, shall we?" Not so, Mr. Cotard.
And then there's the psychologist in the film. Whoah. I sure hope Kaufman never wanders into my office. And then makes a film where I have a prominent background role as a self-promoting, sexy-except-for-the-blisters, doing more-harm-than-good talk-healer. I would be all, "Therapist, tear down that shingle!"
In the end, I don't agree with the four-and-a-half stars. I'm thinking four at best, five-and-a-half at worst. But that's just me. What you think is what counts. I doubt any three people watching this film are affected the same way. Times five.

Email ThisBlogThis!Share to TwitterShare to FacebookShare to Pinterest
Labels: mental therrapy, movies, thinking too much

I can not wait to see this movie. I am such a fan of Philip Seymour Hoffman that I don't even care if I get it. Oh, and Emily Watson. And Catherine Keener. Really, who needs comprehension when you've got all that?

mrs g -- I completely agree. It's an excellent cast. I didn't recognize Emily Watson in her role for quite some time. I was bummed I didn't notice her right away.

The review I read was less flattering, but still thought it worth seeing. I will put it on my list of things I really want to see, but probably won't manage until DVD time. Then again, who knows?

This movie is not out in the UK yet. Thanks for the tip. I will go and see it as soon as it arrives.

The cast is fantastic, and I like to struggle for a movie every once in a while. I'll have to add it to my list.

jenn -- after reading your comment I looked up more reviews. Rolling Stone, not so good. NYTimes, gave it good write up. All say, at the least, it bites off more than it can chew.

lisa -- I agree. It is definately a movie that made me think. There is a LOT to think about. Endless turns and meanings. A little too much but I much prefer that to basic formulaic plot.

I really want to see this movie now that you've introduced it to me. I will add this one to my list. ;-)

cheri -- uh oh. I hope you are glad I did introduce it. We invited a couple friends to go with us the night before but they couldn't make it. 3/4th into the movie I was SO glad they didn't come, I was pretty sure they would have thought I was a crazy woman. It is MY kinda quirky (yet deep) movie but it certainly will not be everyone's cup of tea.

So I see that you're reading "Twilight" and against Prop. 8. Well the author of that book is a conservative Mormon and 10% of the money she makes goes to that tax-exempt business. Just a little info. Great blog!

Anon -- Thanks for commenting and for the info. I knew she was Mormon, didn't know how conservative she was. It might explain one of my chief complaints about the book - female heroine as victim, repeatedly rescued by strong, all-knowing male. Hmmm.