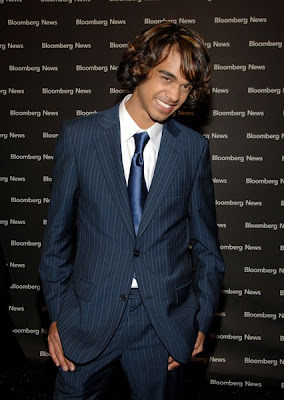 Damn. Why didn't I think of this? Political commentator Chris Kofinis said that Sarah Palin's media blitz these past few days reminds him of Sanjaya.

Now, go away. For the love of goddess and country, go back to Alass-gah.

You can listen to Kofinis below. Fast forward to 1 min. 50 sec. to hear the Sanjaya comment.

Doh! Why didn't I think of this?

I'm practicing self-control and no longer clicking on any online news stories that include her name. If we ignore her (at least in how much publicity she's getting), she will probably go away.

i can't believe she's the true hope of the republican party. that either spells good news for the democrats, or very very bad news. i can't quite tell which.

maybe they could do an album together -- that might help her political career.

All she needs now is a faux-hawk!

Alass-gah. What a hoot! I want to sing that song they sing at football games when the visitor is losing. Nah nah nah nah, hey hey hey, goo-od by-ey!

I turned on the news this morning, in the dark to hear IMPORTANT recession tidings - because I don't want to overload on the media frenzy, but this girl's got to know what's up - and was greeted with Sarah speaking at a conference.

With all that is brewing right now, why is she hogging the airwaves?

All those liberal media accusations seem sillier and sillier to me.

Ha! I hope SP turns out to be as harmless as Sanjaya.

heather -- mostly ignoring her, too. no point in watching, really. like watching a slow moving train wreck.

laurie -- I'm not sure she's got any GOP backing at this point. Looks like she is "going rogue" to me.

real live -- haha! that would be worth turning the tv on to see.

lisa -- liberal media accusations don't hold water. The same media gave hillary plenty of negative coverage. And how about Rev. Wright? How many times did we see his "g-d damn america" surmon? The news covers whatever gets them ratings. Which is exactly why she is given so much air time currently.

I really think the media is going through election withdrawl and just want to keep dragging the whole damn thing out.

I wish they would realize that the rest of America is moving on...please move on media!

And yes, Palin could use a little time in the tropics right about now. Get lost for a little while chica.

Interesting and appropriate observation, although no one cried hysterically in the audience for Palin.

OK, anyone who leaves "cockapoo butt juice" in the comment section of my blog is MY KIND OF PEOPLE.

Love your blog and look forward to reading more of your posts!

Plus, I've never had coffee yogurt and I'm intrigued...