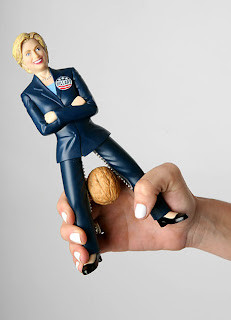 I went to Huffington Post the other night to read my favorite author and now political contributor, Erica Jong. She was talking about her disappointment that Hillary lost, lamenting the role sexism played in bringing Hillary down:

"I want to believe that America has moved beyond violence and racism and maybe we have. But I thought we had moved beyond sexism, and this campaign proved me wrong. The petty woman-hating jibes, the ageism, and the physical mockery have not been easy to watch."
Meanwhile, as I'm reading this, out of the corner of my eye I see the right hand panel of the Huffington screen -- a picture of the face of a woman with unsightly skin. I think it must be a meth addict. I scroll over and discover it is Amy Winehouse. The article talks about Winehouse showing up at her husband's court hearing (he's been in jail) but its about her bad skin . I hadn't heard any updates on Winehouse since the news of her going into rehab (maybe it IS the skin of a meth addict) so I was curious. The article talks a little bit about the court hearing but mostly it's an excuse to show everybody how ugly her skin is and how she's trying to cover it with make up. It bothered me. The woman is coping with her husband in jail and she gets close-ups of her bad skin splattered all over cyberspace. Nice.

Then a little later that same night I was following some other link and stumbled on a blog post entitled, Hag Hand. Its a picture of Sarah Jessica Parker's hand looking old and wrinkly as she reaches to sign an autograph. What is the universe trying to say?
These last two examples are entertainers, of course. But it happens to politically powerful women often enough. Too often for coincidence according to communications researcher Erika Falk, PhD in her book, Women for President: Media Bias in Eight Campaigns.
In particular support of Jong's Hillary point, ABC News asked, Is Clinton Scrutinized About Her Looks Too Much? back in January. 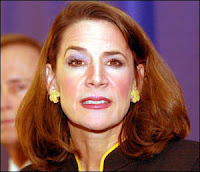 And who can forget Katherine Harris? The media had a field day skewering her makeup in the 2000 Florida election debacle.
The media's double standard in focusing on Harris and other prominent women's appearance was noted by Caryl Rivers, contributer at Women's e News who notes that "men can look like unmade beds and that fact goes unmentioned, while the bodies, hair and makeup of women receive intense scrutiny."

So I certainly agree that sexism is alive and well, undeniably where physical appearance is concerned, and particularly salient in election politics, which matters.
.
The underlying message to women is "if you're not attractive, you have no worth." Or, "we'll keep you in your place one way or the other" and focusing on physical attractiveness (or the lack of) is one way to maintain the status quo of male power.

Professor J posted a video montage a while ago of horrible, sexist things that were said about Hillary. It was enough to make you cry.

It is the same over here. We've had a big hooha over a presenter, Fern Britton who put on weight (so was criticised), then lost it (and was criticised because she did not confess that she had done this by having surgery). Why should we care? Women's bodies are very much public property in a way that men's are not. What women actually say appears to be of little consequence in comparison to how much they weigh, what they have done with their hair or makeup and how old they look.

Amy is a fantastic singer.

Thanks Jenn, is it the Still Drowning montage?
http://professorjsplace.blogspot.com/2008/04/still-drowning.html

I hadn't seen that. Wow, painful and emotional. Especially after seeing her excellent concession speech just now, where a few tears were shed in my kitchen.

It's truly a shame. Our society has so much to learn, sometimes I feel hopeless...like we are all doomed in the end to continue being berated by these unrealistic messages. I hear so many women fussing over their birthdays! I love my birthdays! I can't help but think: "I would rather be getting older than be dead!" But, the sick thing is even though I know all of this, I still fall victim to pinching my tummy or checking out to see if there are wrinkles around my eyes yet. It's so worrisome that I've been conditioned to worry about those things and even though I know to fight these stereotypes, I still find myself right smack dab in the middle of them!

ann - I could have written that post. Even tho I'm "above" said stereotypes, I fall prey to their power. Fact is, older women ARE discriminated against, in everyday thinking and in the workplace and in the marriage (men divorcing wife for younger woman).

The Lorena Bobbit comparison blew me away, too. Oh, but wasn't that so sly?

I was rooting for Obama but, yes, I agree wholeheartedly that Hillary had to put up with a disgusting amount of sexism. Obama and Hillary's campaigns made it perfectly clear that racism is now taboo in Western society (as, of course, it should be) but that it is somehow still OK to come out with viciously sexist crap against women.

We can, at least, be thankful that Obama is married to a strong, powerful woman who will make a fantastic first lady. She is such an inspiration to me.

"Obama and Hillary's campaigns made it perfectly clear that racism is now taboo in Western society (as, of course, it should be) but that it is somehow still OK to come out with viciously sexist crap against women.
"

Exactly! It was good to see the racism called out. It was necessary and right. But yes, I was very disappointed that the sexism in the media (not the Obama camp) was so tolerated. And I agree, am looking forward to Michelle as First Lady. And now that the race is "suspended", I'm very glad Obama is in the running. He'll make a worthy president.

It takes a lot of guts to maintain your dignity and be who you are whilst not bowing to the immense pressure to cower to men's opinions.

Still it's necessary work and makes us stronger as women.

Thanks for sharing this. Erica Jong is one of my heros. She's one of the few feminists who has lived through the 60's and continues to write regularly and strongly from her gut.

I, too, had seen Professor J's post with the anti-Hillary montage. It was incredibly offensive and frightening.

I found Hillary's concession speech incredibly uplifting yesterday. She will be someone we will look back on with our daughters, granddaughters and say that she helped pave the way.

Arianna Huffington came to speak during our adult education hour at our church last year. She was really a fascinating woman.

And I continue to be fascinated from afar by this whole campaign.

alison - makes us stronger, yes. what an uplifting way to look at it.

jck - my girls were big hillary backers, as much as 10 year olds can be. the fact that the campaign drug on so long with so many debates, certainly gave woman power lots of exposure. so all is not lost, by any means.

mary - absolutely fascinating! but L.O.N.G., my goddess, what a long race it was.