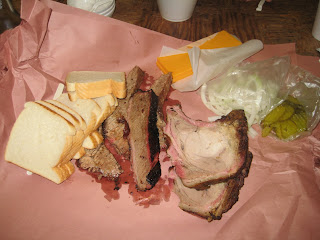 My sister was visiting last week which explains my low frequency blogging of late (that is to say, none). Hats off to all of you daily bloggers. I don't know how you do it.

Australian blogger, Blue Mountains Mary, said she likes reading what we Americans typically do. While I can't speak for all, I can speak for certain Texans and east coast touristas.

One of our traditions is to take a trip to Lockhart, located in central Texas. Known as the "buckle of the barbeque belt," Lockhart boasts some of the best barbeque meat found anywhere.

When I moved to Texas 25 years ago (damn, I sound like an old fart), I wanted nothing to do with barbeque. What came to mind was grilled chicken basted with an overly sweet tomato sauce - and I don't care for that. But Texas bbq, I soon learned, is a whole different animal. Dry-rub wood-fired beef brisket made tender by the slow smoked, 15-plus hour process.

People's taste varies, but diehard Texas bbq lovers swear that "good" bbq doesn't require a sauce. Shouldn't, in fact, have a sauce. A cardinal sin to even ask, some believe, including my native Texan husband. Some say bbq sauce was a northern invention.

Me? Sometimes I like mine dry, sometimes wet. I like to dip mine in the right tasting sauce, I guess. Proving you can take the girl out of yankeeland, but you can't take the yankee out of the girl. Except that I never liked northern bbq sauce to begin with. It took Texas to get it right, I gotta admit.

And what makes the "right" sauce for me, exactly? I have no idea. I've never attempted to make it. I just know it when I taste it.

I'm reading Catfish and Mandala by Andrew Pham, a true story based on a bicycle odyssey across Vietnam. Vietnamese are phanatics, apparently, about their fish sauce. Every family boasts their own secret recipe with a huge range of exotic spices.

Same with Texas bbq sauce. I've never been to two backyard bbq's with the same tasting sauce. Many recipes claim 15 or more ingredients. For example, Worcestershire and Tobasco sauces, chili powder, dry mustard, liquid smoke and cajun seasoning (such as my stand by, Tony Chachere's - pronounced sash-sha-rees - of which, by the way, my sister stuffed three containers in her yankee bound suitcase).

But in Lockhart, sauce is a five letter word. No sauce made, none served. It weren't fittin', I was told, so don't ask for it. Ok. Fine. I put horseradish sauce on it instead. I was feeling rebellious.

Lockhart is a town of little more than 10,000 but it has four large bbq restaurants: Black's, Smitty's, Kreuz Market ("Krites"), and Chisholm Trail. Everyone you meet seems to swear by their favorite. We like Kreuz, not the least because my sister HAS TO HAVE their pork chops when she's in town.

Below is a picture of one of Kreuz huge fire-box fueled bbq pits. They use post oak for the flavor as do most bbq houses (mesquite is too strong, contrary to popular opinion). 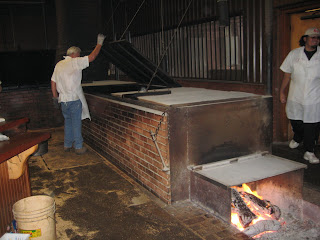 Kreuz has an interesting backdrop. It used to be located in the center of town. The owner, Smitty, left the business to his son and the building to his daughter. They couldn't get along, so the son loaded up some of the burning coals into a wagon and with small fanfair, walked the embers out to the present Kreuz location. Some claim the fire has been burning continously for almost 100 years. The sister in this story remained in the old building and started her competing bbq restaurant, Smitty's.

Below is the cutting board where they saw off the amount of meat want. You order it by the pound. 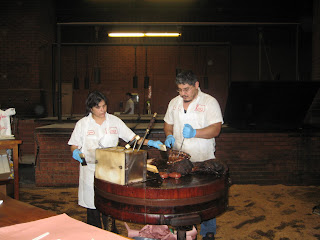 And the final product below. Served on butcher paper: no plates, no forks (because tender beef bbq doesn't require a fork, only fingers). White bread is the standard. Sliced dill pickles. Sliced raw onion. A slab of colby cheese. And, as you can see, no sauce. 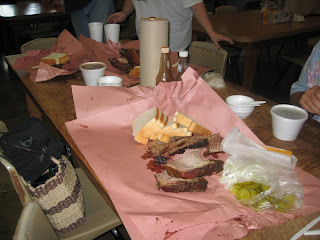 They do, however, keep a bottle of Louisiana Hot Sauce on every table. They may be Texans but they're no dummies.

Email ThisBlogThis!Share to TwitterShare to FacebookShare to Pinterest
Labels: tejas

Thank you my Texan guide ! This was fantastic. I would love that bbq. I would not have had sauce. But I would have taken some of your horseradish. That is all I could think about - oh YUM - beef and horseradish (sauce!) and white bread and oh good grief my mouth is watering.

I might actually like that BBQ--I'm with you on the too sweet sauce that passes for BBQ in California.

oh man i love bbq, and i loved this post. calvin trillin has written a lot about the different kinds of barbecue-memphis vs north carolina vs kansas city.

where is it that they put coleslaw on the pulled pork sandwiches?

all important topics you can address in your next post.... if only blogs had taste-and-smell capability.

ps if you head back to my blog and look in the comments for the books posting, you'll find links to the five-word reviews. enjoy!

mary - I was feeling pretty hungry when I finished writing that! Lucky for me its 4th July this weekend and my n'bor is having bbq.

jenn - the bbq here reminds me of roast beef with a smoked flavor. I'm not usually too big on smoked flavor, but fresh off the pit is an exception.

laurie - dry rub is here. there isn't much to it - my husb uses lots of black pepper, red pepper, salt, not much else. Less is more type thing.

have a great day!

Practical Man thanks you for the pin-up. A bbq fanatic, I wouldn't be surprised if he printed out that photo of the bbq spread and pinned it up over his desk!

I have never, NEVER seen a BBQ like that!

The south doesn't play when it comes to BBQ, but I must say the photos look like a crime scene.

However, when down south, I've been known to indulge a time or two.

Lived in Bastrop, ate bbq every chance I got. Elgin had some good q, no forks, butcher paper and all, but I was sold on Cartwright's (Bastrop) ribs and chicken.

deb - I lived in NC for a short time. They're pork bbq was pretty darned good. My mouth still waters when I think about the "pig-pickin" bbq I attended.

leslie - thanks for stopping by! Sorry to make you homesick.
bastrop is a nice town, but Austin is encroaching by the minute.

my parents fave bbq spot, when they visit, is Elgin. Biggers? Excellent sausage. Can't say I've had the pleasure of Bastrop bbq.