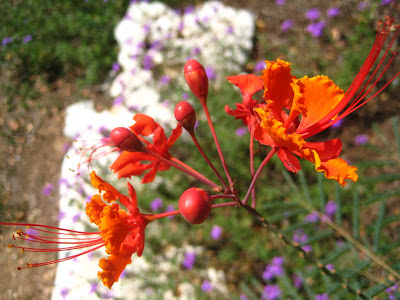 This beautiful flower is called the Mexican Bird of Paradise. It grows in a flower bed planted by my husband, SAM.
It's more than just a pretty plant, however. It's a political statement. An inside joke between us, between my native born husband and this yankee born wife. We don't see much in the way of fall foliage here in central Texas. The one disadvantage of living here, he'll concede. And not very often. Ok, maybe he has never actually said those words. In fact, I'm sure he's never issued such a statement disloyal to his native state.
But it is true there is little in the way of fall colors on the trees here. And on a larger scale, no true fall. Just one long, never-ending-summer followed by a quickie of a winter. This makes September the longest, slowest month, followed closely by October. The summer heat that refuses to bend to the will of a traditional autumn plus the green to faded-green to brown change of colors. It's more than a little depressing for this Jersey girl.
In fact, I feel a serious stab of envy everytime I open blogs which shamelessly display the fall colors of other regions -- Mama Milton's beautiful new header, for example. Man, its so beautiful, it hurts. Even Minnesota Matron with her picture of trees losing their leaves. I see those bright yellows and oranges hiding on the underside of the brown leaves. And I can feel that cool, crisp breeze that blew those leaves to the ground. A ground made of lush, green grass. These fill me with a longing for my East Coast roots. Every year I feel it. Every year I distract myself with, um, what? Food binges? Alcohol? Prickly pear cactus juice? Well, that's a post for later day.
Knowing that I yearn for the colors of fall (some color, any color) my husband has made it his solemn marital vow to bring me as much color as his green thumb can muster. He knows which side of the bed his libido is buttered on, afterall. But mostly he just loves to garden. And hold his hose. He spends hours holding his hose. 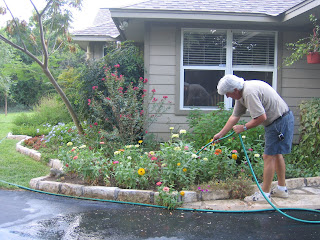 In honor of SAM's efforts, and his upcoming birthday, I've put together a display of a few splashes of color that are now in the landscape around our house. Photos are courtesy of our son. I appreciate his efforts, too. 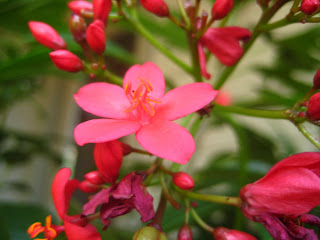 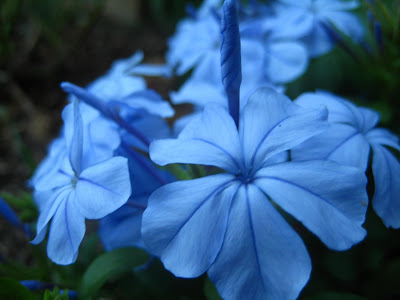 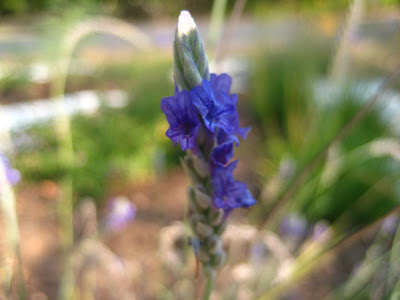 Not sure what these are called but I love the papery texture of the tiny petals. 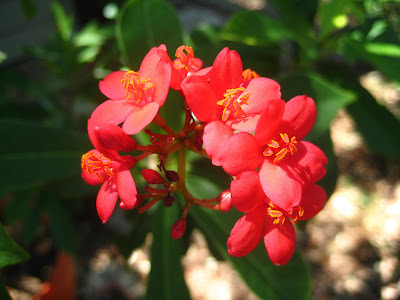 This cluster of red flowers comes from a Father's Day gift to SAM. None of us can remember the name of the plant, though. A few days ago we gave one to a friend who lost a parent. We read the long, Latin name, repeated it, said it out loud, all in an attempt to etch it into our brains. We still can't remember what it's called. But SAM did learn that this is the plant that is used most often for the making of biofuel. Its a tropical plant that is, apparently, very oily. 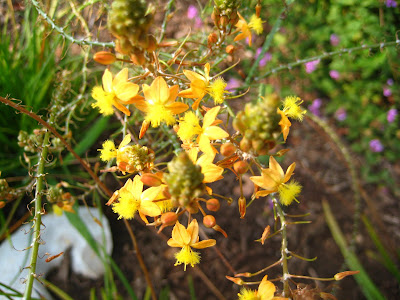 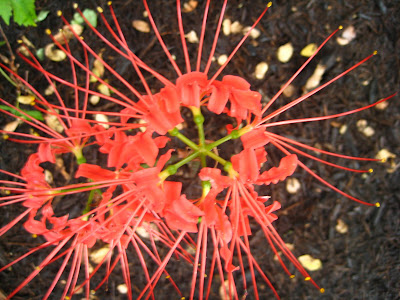 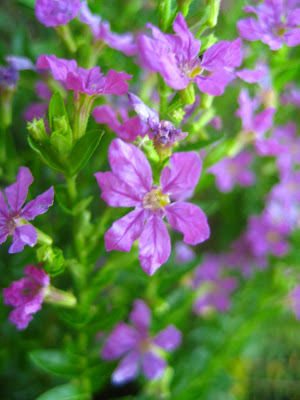 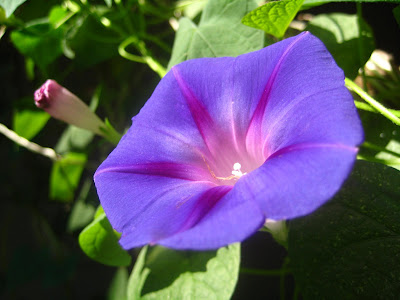 Morning glory. One of my favorites. I get to take a little bit of credit for these. I water and fertilize them occasionally. I also built a slip shod trellis out of coat hanger wire and ligustrum branches. Not very pretty nekkid, but when covered in vine, I'm happy. 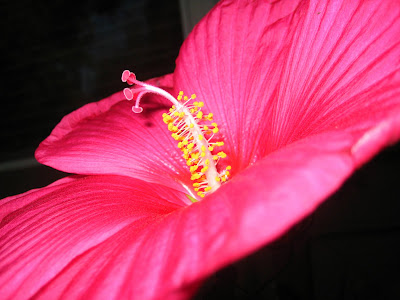 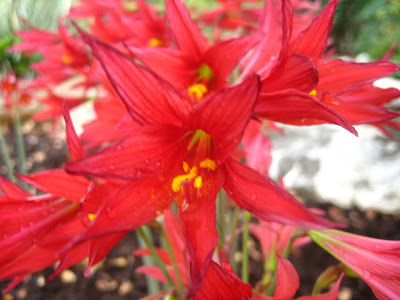 These are called Oxblood Lillies. Or Schoolhouse Lillies, as my mother-in-law calls them, because they only bloom during the early fall. 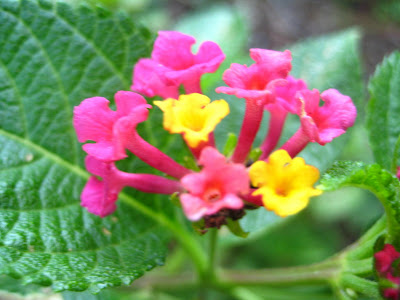 Lantana. A staple that surrounds our house. There's the pink and yellow variety called Confetti Lantana. 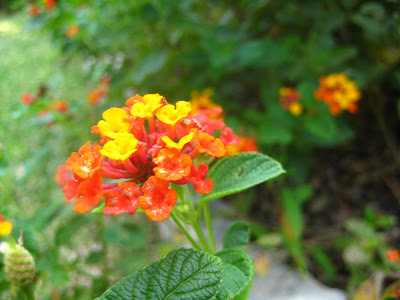 And the orange and yellow variety. They begin yellow and turn orange with age. Lantana grows wild in the fields behind our house. It requires little to no watering and maintenance.

Less hose holding, in other words. Which spells more hand holding with me. And I like hand holding even more than I like his gift of fall colors. A big thank you to SAM. A big happy birthday. And a big wish for happy gardening. 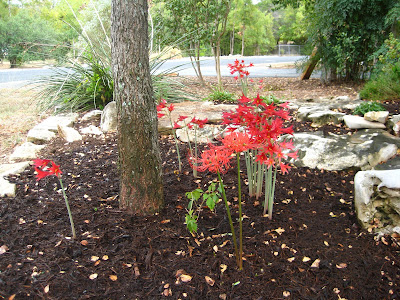 UPDATE: The red father's day gift flower is called, Compact Jatropha. My neighbor just phoned it in.
And in case any of you want to start your own biofuel farm: 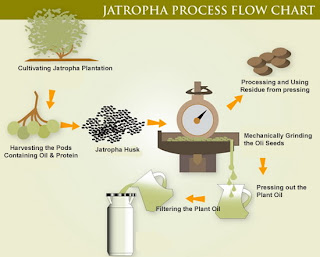 How I loved this post - looking at all your Texan plants.

Lantana is a noxious weed here - and morning glory is close.

They are lovely though!

I lived in South Texas for about 5 years a lifetime ago and seeing these made me a bit "homesick" for Texas!!!
I do love all the color....and, the Hibiscus is one of my all-time favorites!!
Thank you so much for taking all the beautiful photos!!!

You might get your husband to take you down to Lost Maples, or up to East Texas (where I hail from) some autumn, just to get you a "fix" of some colorful leave changing.

I think I would miss the changing colors of fall too! But, once winter rolls around...I'll be wanting to move in with you down there! I love the photo of your hubby gardening! It gives me a glimpse of your life a bit more!

Happy Birthday to your gardener!

I've never had the fall colors around--being a native of SoCal--but I took a trip to Massachusetts and New Hampshire in October once and I can see why you get depressed. It's pretty spectacular.

beautiful. i love the spider lilies. i have some in my yard and i finally have a professional lawn mower who doesn't mow them all down (as opposed to my husband who has taken them out the other 12 years we've lived here...)

mary -- I could get used to a terrain where morning glory grows wild like that.

dkuroiwa -- hibiscus is a big favorite here, too

texashorselady -- I LOVE Lost Maples park. SAM planted a maple tree in our backyard, same variety that grows out there. In fact, we're on our second (the first didn't make it). He's trying, right?

annd -- yes, I am very grateful for the low maintenance winters down here. I wouldn't trade foliage for snow. Though maybe just one good snow each year would be wonderful.

jenn -- I miss the foliage and I miss those crisp fall football afternoons. When we go see an Aggie game and swelter in the stands, I think, "this is football?"

THOSE are gorgeous. Wow. Such beauty!

I'm sad to say I didn't hardly recognize any of those flowers; my northwest is showing.

They are all so lovely, but I'm partial to the orange. Stunning.

That is FANTASTIC. He better get lucky tonight, girl. He deserves it. I love the lantana. I've often wondered what the name of that is....:-)

This has nothing to do with this post. But, it is perhaps THE FUNNIEST therapy spoof I've ever seen. You must watch it!

You have a husband that gardens?? I am soooo jealous.

The flowers are gorgeous.

So lovely. I'll take those flowers over leaves any day. But fall is beautiful, no doubt.

(I added you to my blogroll, FYI.)

I love those plants. We don't have all those up here in yankeeland! My mother loved lantana...those brought back sweet memories. Happy Birthday SAM!

deb -- thanks ! I'll make sure the gardener sees your comment.

lisa -- glad to bring a little southwest to your northwest.

vodka mom -- haha! I like the way you think.

ann -- I'll have to give Bob Newhart's advice a try one of these days (when I'm ready to retire!)

onebrick -- he also grows veggies. what a man, huh?!

therapydoc -- the flowers do console me, yes they do.

cheri -- thanks for adding me!

mental p mama -- always happy to oblige the jogging of pleasant memories. thanks for stopping by!

Wow - that is a different fall altogether, isn't it? I can see why you miss the turning of the leaves--it's my favorite season--but, on the bright side, you don't have snow in April. And friend, there's nothing fun about that! Suddenly, I get the "snowbirds." Does that mean I'm old?!

I'm a big fan of autumn colors as well. Our Fall is so short here (as you well know). So any opportunity I can take to stretch it out by decorating in orange, red, yellow and brown is welcome. Love your garden.

I find October/November very hard to take here in the UK - the weather can be dismal and grey and I miss the sun. I kind of get used to it by December.

But you are right - I suppose I might miss the autumn leaves. Well, maybe? For a few days when the sun is out and it is all crisp and cold the world does look a beautiful place - but then the wind blows up and the rain comes down and they are all squished and yucky on the ground.

I love hibiscus - mine only flowers for the month of August.

Maybe I could move in with you????

hip mom -- keep talking. snow in April makes me embrace the 90 degree temps in October (altho woke up to a chilly 57 this a.m.)

apathy -- yep. love my little pumpkin decorations. fake it til we make it to winter.

rb -- we could do a mommy-exchange program. our kids may not even notice.

I wish I could send you a blast of the cool air that we have here in TN this morning! With the touch of rain that just moved through, we're going to have some beautiful colors soon!

I *love* your lantanas! You have some gorgeous colors of your own!

Beautiful photos. I go through the same leaf thing here. We get some but nowhere near as much as at home. Sigh.

my dad used to plant morning glories out by the garage--the only sunny part of the yard. and then he'd make us all get out of bed every morning and go look at them.

(i think in those days they only opened in the morning, and then closed.)

but i still love them.

real live -- we could sure use some rain. we're so parched here.

hp -- I really do miss that colorful palette against a blue sky!

laurie -- yes, they do close up by mid-afternoon some days.