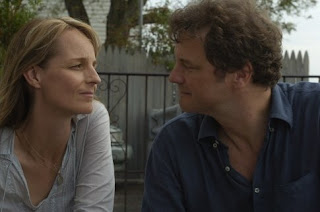 .
Just saw Helen Hunt's directorial debut, Then She Found Me. I thought it was excellent, excellent, excellent. My kinda film. All the ingredients of authentic human drama: poignant, funny, heartbreaking, uplifting, disappointing, kind, thoughtless, smart and idiotic. My friend and I were laughing out loud throughout (when we weren't dabbing at tears). It was the right blend of quirky and emotionally touching. And Colin is awfully nice to look at (my secret boyfriend, Mrs. G). He had me with "you need to get some sleep." Plus a couple of my other favorite actors: Bette Midler (awesome) and Matthew Broderick.
.
. 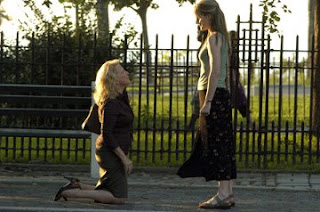 .
If you don't know what this movie is about, I suggest you don't read too many reviews. Maybe not any. There were critical plot pieces that I didn't know anything about and was happily surprised. I've been looking over reviews to link to but they all give away too much.
So I thought I would help you out. Here's a review by Marjorie Baumgarten, one that does the film justice, minus a few details I think you're better off not knowing:
Hunt's debut as a film director makes me glad she found us. This story about a 39-year-old woman whose biological clock is ticking loudly and whose life is not turning out as planned is a work of maturity – at least in its humanist perspective if not always its cinematic scope. The film delivers a nice blend of drama, comedy, and the unknown, in other words, an accurate reflection of life as we live it. Based on a novel by Elinor Lipman, Then She Found Me finds just the right tone for detailing its heroine's problems. It's neither a sob story nor a satire, which helps make the character's problems seem both genuine and worthy of exploration. Hunt also stars as April Epner, the story's central figure, a casting choice that was probably a necessity for getting the movie financed but a wearying position for a first-time filmmaker to find herself in. This factor no doubt contributes to the drab appearance of April, a plain-Jane New York schoolteacher who, on the verge of 40, marries a mama's boy from the neighborhood (Broderick) in order to start a family. Her own mother has advised her to adopt, but April wants a biological baby. April, having been adopted herself, rudely insists to her adopted mother that there's a discernible difference. In short order, April's husband abandons her, then her mother dies, leaving April a mother to no one and a daughter to none. During this time, two individuals enter her life – Frank (Firth), the single dad of one of her young students, and Bernice (Midler), the woman who blah blah blah.... Midler plays the character with lovely control, creating a realistic human being who also suffers from unrequited needs, rather than a cartoonish and self-centered busybody. Of course, one could look at the scenario and see blah blah blah and one ex-husband for the quintessential Mr. Darcy. However, the screenplay has more subtle complications to its credit and never strays far from what's realistic. (The film is especially satisfying in regard to April's expression of her Judaism.) Hunt's visual palette often looks as drab as the character she plays, but the film's rhythms are well-tailored yet pliant. A scene at a benefit for one of Midler's pet causes, River Keepers, rates a smile, but when blah blah blah shows up in the role of April's gynecologist, the odd casting may take a viewer out of the movie for a second. Some may dismiss Then She Found Me as a mere "women's film," but it's really a more honest and mature take on sex and the city.

you had me at colin firth.

I will make it a point to see it--now that I'm FREE!

Laurie, it doesn't take much more than that for me, either.

Yes Jenn, now that you have gobs of time, be sure to get firthed!

Thanks Mrs. G, knew you would (even though he was mine firth, I mean, first)