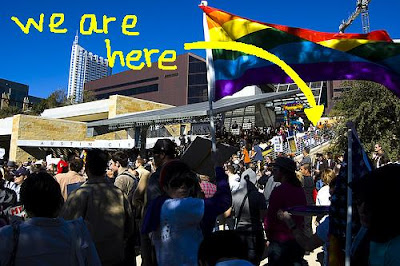 I took my teenage son and his friend to Saturday's protest rally opposing Proposition 8. My son's friend was hesitant. "What if there is violence?" "The people there will think I'm a lesbian." But in the end, she came along. It was a great feeling for me. For my child and his friend to see so many strong, outspoken, positive members of the GLBT community. To be reminded that the push for same-sex marriage isn't just about two adults who love each other and want to share in a lifelong committment as well as enjoy the rights and priviledges that come with it. No, it's not just that. There are the children. Like Mason. Who just want what other families get to have: Married parents. 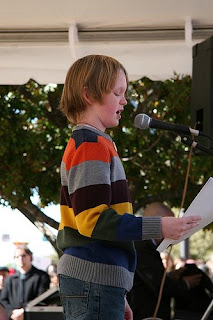 Mason is a 10 year old who spoke with all the command of a veteran speech maker. Mason has two moms. He said kids at school tell him his is not "a real family." That his family is "weird." He announced that only 23% of families in our nation are comprised of the traditional nuclear family: a married mom, dad and their kids. "My math teacher tells me that's a minority!" The crowd roared. I cried.

All three of us bought this t-shirt to celebrate the day from EqualityTexas, to contribute to the cause, and to help this dream of equality become a reality. 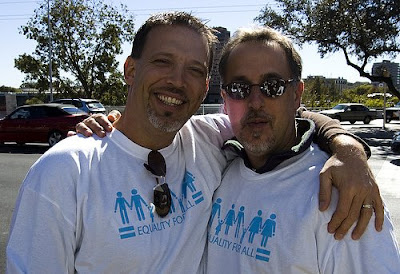 It was also very cool to know that I was standing in unity with some of my bloggy friends: Jenn , Cheri, Kelli, QueersUnited, and DebOnTheRocks. Anyone else attend? Leave a link and I'll include you in my list. 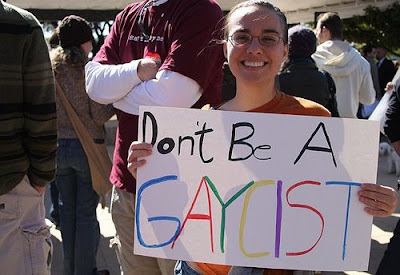 Thanks to austinistdotcom's photostream for posting their Prop 8 Protest pictures to flickr, allowing this slacker mom, who left her camera at home, to post all of the pictures you are seeing to her blog: 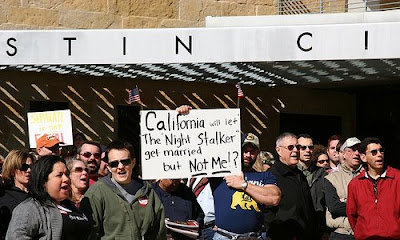 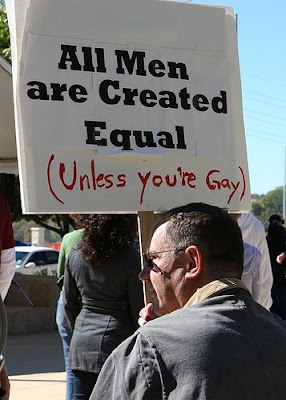 I squishy heart Mason. That kid is going places. Not in spite of his family, but because of it.

You are a great bloggy friend, thanks so much for standing in unison with us!!! I like the t-shirts, I need some lgbt shirts, but I also want a "this is what a feminist looks like" and it works great since I am a man and 110% down with the womens lib movement.

mental p -- clearly! he was enthralling.

I didn't make it to the rally but had another conversation with 2nd graders on the subject because they hear about it frequently but mainly because they don't see what the big deal is.

I guess I don't either. I'm so much a to each his or her own kind of gal, I forget not every one shares my viewpoint.

That's for standing there in our stead.

I just don't get it: who can be against love?

You are awesome, and your kiddo and his friend too. She had very natural concerns. (That's why they invented the I'm Straight But Not Narrow button!)

I hope they got the feeling, though, that being a straight ally is sooooo super powerful and maybe more importantly helps gay people very much feel like, well, people. They rock!

It feels awesome to know that while I was in my little town, you were in your city and others we talk to online where in theirs! Fabulous!

queers -- thanks for the link!

lisa -- I was happy to represent you and all the others who wished they could have been present.

deb -- ditto the excellent feeling of unity. kudos to the organizers!

I love that you all went and that you took your kid! What an experience he will remember. Hopefully, he'll be remembering in a world where equal marriage rights has been in place for quite some time and he can think: "I was a part of that. I helped make that happen."

flutter -- yeah, mason is quite a kid.

very nice. tyranny of the majority.

What is truly sad is that here in Macon, Ga, if I put a protest poster in my front yard (where can I get one of those?) I am not sure anyone would even know what it meant...so sad...

Good for you taking your son and his friend with you as your actions will impress on them more than all the words in the world.

Mason is going to be a real force to be reckoned with!

I'm pretty sure I love you. All of y'all.

Weren't the signs impressive? Such creativity and wit.

Your teenage son and my teenage daughter ROCK!

You are a BLESSING!

I have a lot of pictures and links to post . . . probably tomorrow.

Dear Mason. Good for him. I feel the winds of change a coming. I do.
Yesterday 108 retired generals and admirals called for the “don't ask, don't tell policy” for military service to be repealed, to allow gays and lesbians to serve openly and honestly in their military positions. The tides are turning. Maybe slowly still...but I can tell they are starting to pick up a little speed.

If anything came out of Prop 8, it's that the world is not going to sit back and take things lightly. There's been an outpouring of love and I find that so heartening.

Good for you. It is amazing the numbers who are getting behind this protest.

It is a pity really that people were not campaigning more actively before the vote but I guess everyone was distracted by the main election and perhaps people believed the vote would not go the wrong way. It seems odd to me from the other side of the Atlantic.

But it needs sorting! So I am glad you are all getting on with it!!!

I agree with Jenn that the signs from all the protests were great!
The whole idea that so many people would protest...and not just in California...has been a topic that some of my students have wanted to talk about.
I'm so proud of you..and your son..and all the other people that we "know" that were out there. We all have a voice...some people just use theirs more!! Good for you all!!

Thanks for such great post. I think I am still shell shocked over the loss. Sometimes I want to find those that voted yes and yell out:

"I'm assuming now that gay people can't get married the quality of YOUR life has improved dramatically! I mean that is why you voted yes right b/c your life was so so horrible prior to the moment? Huh?!!!!"

You are on the blogroll of peeps today.

Wish I had been there. This is incredibly unfair. Wifebeaters and child killers can get married as often as they wish, yet loving individuals of the same gender cannot. What a world...what a world!!

Prop 8 is totally disgusting. I don't understand it. Two Wars? Effed up economy? And people are worried about PEOPLE WHO LOVE EACH OTHER?! And moreover, why don't people understand that there's a difference between marriage as a state-run function and religious marriage. If you want your church or whatever to be a disgusting and bigoted organization, then go join it. But don't inflict that horror show on the rest of us.

I would have cried hearing Mason, too. I wish the No on Prop 8 campaign had placed more emphasis on this..the fact that there are many different kinds of families.

I don't understand people hating love. Or maybe they're just people who love to hate.

Either way it's messed up.