time for another segment of let's ridicule riddle 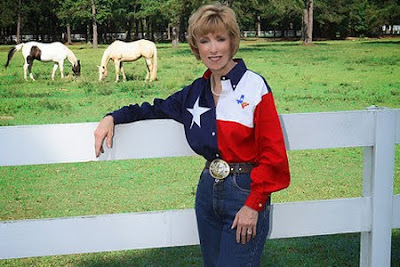 She's at it again. Debbie Riddle, un-esteemed State Rep. (R) from Tomball, Texas, won't be shamed out of her relentless pursuit of anchor babies and terror babies in this here grand state. Apparently Texas can't let Arizona beat it at making racist headlines.
Intent on proving everything is not only bigger but also stupider in Texas, Riddle camped out all night at the Texas Capitol on Sunday so she could be first to pre-file her clone of Arizona's racial profiling immigration law for the upcoming legislative session.
In her words the bill, “gives law enforcement officers additional tools, if they have the reasonable suspicion that there is a violation of a law, to inquire into an individual’s immigration status.”
She is that serious because terror babies are that big of a threat, yawl.
I used to think it was really odd that the Texas legislature met only once every two years. With legislators like Riddle, I now think it's a godsend.

Can't really comment because I know nothing of American politics, however, I came by to say that you should pursue your dream of becoming a walking therapist! I'd pay to walk and talk. Have any opening next Thursday? :)

It's stuff like that makes me ashamed to live in Texas sometimes.

hokgardner -- Oh yes. So many examples where I shudder, "What am I doing here, again?"

And I though MY state politics were bad...

Oh walk and talk sounds fantastic! Love that idea. You could market is as a get healthy emotionally AND physically!

We have to hope in karma--that she receives what she puts out.

I'm just stuck on that shirt she's wearing, the belt and the jeans. Please don't make me go beyond that.