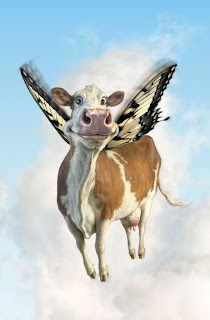 Ever have one of those bad blogger days when you realize you've misspelled a word in your post or mixed up a metaphor and hope your readers don't realize you really are an idiot in the disguise of a wannabe writer?
Well, fear not, friends. Whatever your bloggulous blunder, your metaphorical misstep, it shrinks to a mere speck on the ass of a gnat that lands on the wing of a cow by comparison to a boneheaded missive posted at Fox Nation.
If you blinked for a few days lifetimes like I did, you missed it. But the masterinvestigators at mediate were keeping watch on The Fox Nation with their eyes wide shut and their minds wide shocked when Fox Nation reposted an Obama-bashing article from The Onion. Reposted it without mentioning the fact that The Onion is satire.
You really have to read this mediate post for yourself or this Talking Points Memo recap if you want the full on delightfully incredulous effect.
You can't read the original Fox News post because they've taken it down. I've already checked --no horse stall too full of manure for this blogger to wade her wellingtons through in order to track down the origin of an internet story.
In other words, Oops Confirmed.
Or was it? We presume the author of this repost was asleep at the blogwheel. But then there are the editors who are more discerning. Right? Or was this an effort to mislead by design, hoping nobody would call them on it?

I have often thought that Fox news was humor impaired.

Just shows that they troll around for negative stories about the administration and print them without any substantiation.

I have just signed up to be your latest follower lured by the prospect of being under a heading that indicates i am indeed one of the sexiest people. I so enjoy reading your posts it was about time I made a commitment to you. Darn I've just had to retype this as I made mistakes....still in good (?) company there I guess.

The sad thing is, we're going to get this in spam emails from crackpot relatives and friends for the next couple of months.