another texan tells a tall one 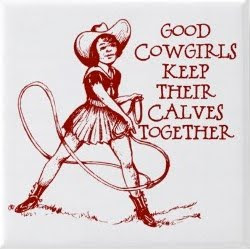 Gather up,
cowgirls and cowpokes.
You don't want to miss this.
The latest in a long line of Texas' finest
guv-mint 'fishals
spoutin' off at the mouth.
Without further ado, I inner-duce you
to one of Texas' State Representatives, 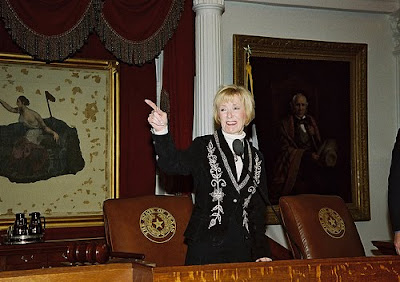 Debbie Riddle, Republican from Tomball, Texas.
Don't know whar Tomball is?
Why it's just east 'o Waller, down the road a middlin' from Stagecoach.
Whut? Don't know whar Stagecoach is?
Ok-doke.
It's up the road a piece from Houston-town.
So go 'head on. Watch the clip.
Where Anderson Cooper gets all swole up talkin' to Rep. Riddle on her claim that,
pregnant women are coming to the U.S. as tourists, having babies, and then going back home, quote, with the nefarious purpose of turning them into little terrorists who will then come back to the U.S. and do us harm as part of an organized terror element.

Terrorist babies. Now if that don't put pepper in yer gumbo!
Rep. Riddle goes on to spin a yarn that "it is common knowledge" that 81% of babies born in one Houston hospital are "anchor babies."
You know what that is, don't chee? Anchors are babies born to illegal aliens (undocumented immigrants to you and me) in the U.S. so they can later brang more immigrant relatives to soak up our well-far (tax payer supported health care).
But these anchors want more than our well-far. They're gonna be trained terrorists who come back to the U.S. and blow up our cars an' buildings an' ever'thang! 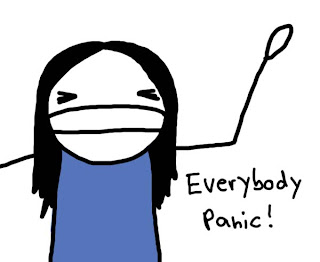 Contacted by staff from the Austin American Statesman, Riddle stated she "shouldn't have talked about the terror babies."
Whut? Nuh -uh! Of course you should, Missus Riddle! We Amaricans have a right to be cattle-prodded into voting booths out of fear of infant terror cells spewing out in our very own hospitals.
Who cares that Riddle's facts don't squar?
Facts she got from an opinion piece written by fellow republican and State Senator Dan Patrick, R-Houston. How 'bout that? Another republican't. Well, I'll just swaney!
Truth is, where truth equals fact published on paper, closer to 60% of mothers giving birth in Houston hospitals are undocumented. That's a sobering statistic, to be sure, but it ain't nowhar close to no 81%.
But hold yer horses. Only "a few percentage points" off, according to State Senator Patrick.
Hell fire f-ck, that man does some wondrous 'rithmatic.
But I'll swan that Riddle and Patrick know what their fellow Texans have to say about opinions:
They're like assholes. Some are just louder and smellier than others. 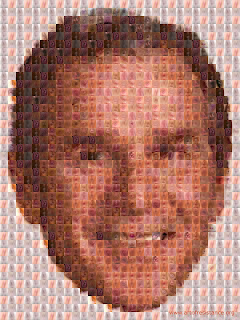 click here to see what this picture of "W" is made of
Dad'gum right.
Here's the clip again if you want to take a gander. Worth every one of them thar eleven minutes.
I love the way, at the end, she figgers out she's bitten off more than she can swally so she lapses into the usual clap-trap, "The people of Texas are demanding that our border be secure!"
Do you think by we Texans she's including the 37% that's hispanic? 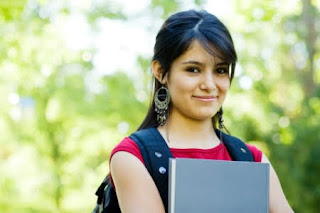 P.S. I tried to embed the clip. "Embedded disabled by request." Hmm. I wonder who doesn't want this clip going viral?

Email ThisBlogThis!Share to TwitterShare to FacebookShare to Pinterest
Labels: lies and the lying liars who tell them, politics, tejas

I'm sure we have terror babies in San Diego, but we just ignore them and go to the beach!

This is just one more time that I'm embarrassed to live in Texas.

I bet she heard it from a retired FBI agent.

You know, even though I know its insane, I sometimes try to follow these idiots' logic and see if it makes even a jot of sense.

For this to be true, you would have to accept that a poor pregnant woman would go through the incredibly expensive and harrowing difficulty of coming into the US illegally and giving birth. And that, having done that, she would decide to take her baby BACK to the country she had fled - you know, the one so many of her countrymen are fleeing because of poverty, crime, and unemployment. And that she would then invest the next 20 years to raising a child in poverty, crime and unemployment while simultaneously indoctrinating him to attack a different country than the one she's living in that is causeing the poverty, crime and unemployment.

And that her child, like so very very many children, would grow to young adulthood to do exactly what his mother wanted him to do, instead of rebel against his parents.

and that there would be scores of such families, all in contact with one another, doing the same.

And that this is a plot worthy of investment of time and money by its diabolical creators.

Interesting and great read, y'all.

(That was sarcasm. I'm a little rusty.)

I don't even know what to say. Plus my fake-Texan-accent doesn't hold a candle to yours, so I won't even try. Just, yeuch.

The sad thing is that this stuff just gets repeated and repeated and then it becomes an accepted "fact" by many Americans because the media doesn't stand up and call them out ans crazy liars. Accually if the media does, then they call the media biased and liberal and tell people not to believe what they say. It is all so sad and scary to me. I wonder when and how this will end.

sigh. that is all.

Oh I love it. LOVE it.
How do people get so f'ing stoopid?
My grandfather once said "My parents didn't come here from Russia to work hard only to be surrounded by Mexicans..."

jenn -- that's what I want to say to the Tomball State Rep - "shut up and go to the beach, will ya? and maybe help with the clean up effort since I am sure you were one of the many Texas gov't officials chiming 'drill baby drill!'" Oh my, that was quite a rant!

aunt snow -- Retired FBI agent is exactly right! I can tell you keep up with the conspiracy theorists ; ) And you are so right in your pragmatic reasoning.

lass -- the accent is contagious, isn't it? speaking of accents, I finished reading Guynd, memoir about an American in Scotland, and talk about interesting accents, the Scots take the cake on that score.

blognut -- sarcasm duly noted. welcome back! where ya been?

susan -- that's one of the best summaries I've heard of the psychology of fear as used by the right wing. I'm afraid they have studied their psych tests a little too thoroughly and have found something that helps get them elected despite a record of economic (near) collapse.

becca -- I know how you feel. A lot of despairing sighs here, too.

ella -- I've got relatives who are only a few generations away from their European origins and I hear the same thing. Mocking the Spanish speakers when their grandmother couldn't speak a word of English.

I have officially had to take a media break because I can't bear to wade through the shit.

It's just crazy that people believe this shit. Surprised that the teensy wristbands that those babies wear in the hospital don't say "terror baby."

(I do love the cowgirl button, have to say.)

terror babies huh? you are also referring to the two screaming documented American ones that were on my flight from LA to NYC right?

Oh holy four letter words! She's a poster-child for teaching critical thinking skills in school. Maybe it would prevent the mush that has taken the place of her brain.

Distractions surround us. One aspect of undocumented persons from Mexico giving birth in US hospitals is that, because these women tend to be so poor, it is unlikely they have had any prenatal care. This contributes to complicated deliveries with expensive financial outcomes. The costs ultimately get shifted to citizens with health insurance.

There has to be a humane way to address this situation. At a time when we need leadership at all levels of government, we have partisan crazy talk & fear-mongering at an all time high level of absurdity.

OMG that picture of Shrub kills me.

Holy crap. She's another Sarah Palin, just spouting shit out her backside. Do I think there's an anchor baby problem? Yeah, I do, but not nearly to the degree that this nutjob is talking about and certainly, and I can't state this vehemently enough, there are no terror babies! Good god. Those are the kind of women who give women a bad name.