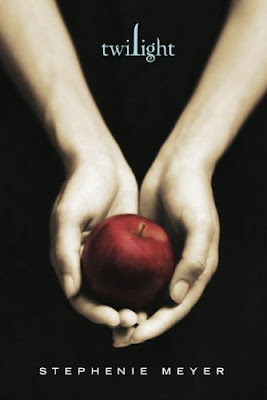 I am participating.
I will have to write this on the fly,
however.

I've only got three million
holiday/work/domestic
chores on my to-do-list today.
Bear with me.

Without doubt, the single most redeeming aspect of Stephanie Meyer's book was Edward. Not just Edward's cool and beautiful hawtness, but his restraint. His dangerous desire reigned in with low grunts and growls. His tender touch and sweet breath. How much he longed for Bella's sweet smell. What woman isn't turned on by a man who finds her scent captivating and damned near irresistible? Oooh yeah, baby. Suck my blood now. (It was enough to revive this reader's carnal desires of the human variety, if you know what I mean, and, I don't mind publicizing, one of the few books from which my husband has reaped personal benefit).

The second most redeeming facet of Twilight is the underlying storyline: teenage vampires in our midst, or mist. Well, both. It's a fascinating concept. The explanations, the myth borrowing and busting. I especially loved the ingenious vampire version of vegan. It's a metaphor for humanitarian motives: overcoming our baser instincts, practicing self discipline, bettering ourselves by making conscientious and healthy choices.

The most disappointing aspect of this book is our heroine, Bella. She stumbles through this book, literally and figuratively, in a romantic daze. I didn't find it cute. I didn't find it endearing. I found it annoying as hell. I found her clutziness a symbol of weakness and a lack of forthright, confident self-directedness and self-knowledge. Ok, so Bella is a teenager in love. Cut her some slack, why don't I? Of course. But the heroine is supposed to grow and undergo significant change in the course of a novel. I don't see this happening.

Frustrated and irritated, I just didn't find much to admire in Bella. Yes, she's a dutiful little student who gets high grades. So an intelligent young heroine, in the academic sense, yes. But otherwise, she does not represent a strong heroine with a purpose that I respect and want my daughters to emulate. I kept hoping to see a young woman who grows to make decisions in her own best interest, not one who repeatedly drops everything and reroutes her life in singular pursuit of a romantic interest. As one example, Bella becomes largely bored with her friends and loses them whenever Edward wiggles his perfect little finger. This is so not the modern message we want for our teenage girls, or adult women, for that matter.

Time and again we see Bella happily choosing the traditional female role of service toward others and nurturing loved ones, often at her own expense. Twilight opens with Bella leaving her home in Arizona, not because she wants to get to know her father better and explore new terrain but as a sacrificial offering to her mother, to alleviate her mother's guilt. Once she gets there, she eagerly cooks for, worries about and dotes on her father, the other man in her life, who, for reasons not explained, has lived alone for longer than a decade. What? No eligible women in Forks?

But the biggest problem I had with this novel? That tired and insidious female victimhood thing happening. Female victim romanticized. Yet another female rescued by strong, perfect, omnicient male. Made sexy.

At one point an evil foe is in hot pursuit: Bella comes up with the plan to save herself and her vampire friends. And everyone around her nods. Yes, this plan could save us.

Ah, I thought with satisfaction. Finally. Redemption. Bella's transforming on the page. She will save herself and save Edward too, rather than the other way around.

But no. Instead she walks right into harms way, into the hall of mirrors, further endangering herself and Edward. It reminded me of so many books and movies where the heroine (seldom her male counterpart) does the very thing that puts her in the most danger, leaving the audience incredulous: "Why is she doing that?!? What is she thinking?!? She's so stupid!!"

With Bella, I'm disappointed to say, we are given a weak and clumsy victim in need of repeated rescuing. Bah.

And yet, upon completing Twilight, what did I do? I quickly ran into my teenager's room and found the sequel, New Moon. Must see what happens next. Must be seduced by more Edwardy hawtness. Feminism be damned.

This is the true gift of Meyer's writing. Like her hero Edward, she keeps us wanting more, even when it isn't all that good for us.

Oh, man, I still have managed to resist the planetary pull to read this book. It's like that time I was the only girl in all of junior high without leg warmers.

I'm not sure how much longer I can hold out. On the leg warmers, I mean.

anna -- I resisted for quite some time. Read it in part b/c my son was so into it that I thought it would be fun to share. But then I had friends who talked about the hawtness of Edward that I had to see for myself. Glad I did.

Your review was so much more eloquent than mine - but very similar. I do worry about the message this book sends out to the millions of young girls who are enamored by the romance. Will they not listen to their gut when red flags pop up that they need to stay away from a bad character, because they want to find the "good Edward" in them? Seriously flawed message there. Yet... a fun read. Darn it - why can't I just hate the thing entirely and be done with it?

Glad to have found your blog - more late night reading for me! :-)

as If i need ONE MORE book to read.

Great review! Interesting take on Bella--I chalked a lot of that up to the fact that the book in written from her perspective. There is a version in Edward's out there somewhere, and I'd be interested in seeing her through another's eyes. But all that being said, they are interesting books, no?

I too will succumb to the pull that is Stephanie Meyer soon. My book club is reading them, so there ya go.

I guess with Bella, you might want to consider that the author is Mormon. That may have something to do with it.

I don't think I can be bothered.

Interesting... I thought with few exceptions, that Bella was a decision maker. Not always good decisions, but she didn't sit around waiting for things to happen to her or for her. Granted, she needed a lot of rescuing and yeah, I'd much rather my daughter's were more self reliant.

You're right on about Edward...

I love the Twilight Books. I can see where you are coming from about her being weak. The second one makes me not like her even more. Too bad life and work and everything else has gotten in the way of me finishing #2! UGH!

I saw the movie and it was ok. Not great but I enjoyed enough that I would see the sequel. I can't wait to read the books. Waiting on a break from school!

Yes! You said what I couldn't put into words about how I felt about Bella! I was extremely bored with her, but fortunately, Ms. Meyer kept us going in spite of it.

With you and Mama's review, mine totally pales in comparison! LOL

(As far as my background on my blog? Go get it my dear at TheCutestBlogOnTheBlock.com. Copy and paste and you're done. I thank you very much for visiting!)

great review ... spot on ....
i read all four for the hawtness as well ....
the plots become more involved than just young love ... but the hawtness becomes tepid!!
i quit dreaming about vampires midway through the second one .... the second one will have you even more distressed about bella!

I enjoyed the books, I am not quite the obsessive fan that they have come to be known for. I just finished the 4th one and found the ending to be totally boring and disappointing. I won't be re-reading these ever again like I do with my Harry Potter books. Once was definitely enough for Twilight.

I guess I'm just not one for love stories...I found the fact that every boy in this town falls head over heels in love with her very "blech" and rolled my eyes at a lot of the cornier "love" stuff. It's all been done before.

These books have become so popular that I worry that we are going to have a generation of girls who thinks this is what love is.

I'm holding off on reading these books until my daughter "gets there" in a few years.

Reviews of the film have Bella as the best-played character, interestingly.

You make it sound intriguing. But, I am with you on the woman gets rescued and everything is then fine, because she has been saved. Not a good image for girls.

GREAT review. I may have to bump a couple in my stack of get-to reading and move this one closer to the bottom. I'm with you, nothing irks me more in a movie/book than a clueless heroine.

But I do like a male lead that gets me hot and bothered.

I love me some vampires but I just can't get into this one.

(My daughter is loving it though as well it should be. It is a YA title, after all.)

So far I have been able to resist the pull but I've been feeling a little left out lately since everyone else is talking about these books. The last time I fell into this peer group pull, I ended up getting hooked on Sex and the City.

Unrelated to Twilight (sorry) -- I love your limerick!

Great review. I read the first one, nobody got laid in my house because of it, and I actually HAD the 2nd and 3rd on loan from a friend and gave them back unread. I did enjoy reading it though, and glad I know what all the fuss is about.

I read the books with my 15-yro daughter. And by "read," I mean devoured like mad dogs. And I have to say, Bella? Not so much the role model I want for my girls, thanks anyway. Because Bella? Kind of a wimp, actually. And, just saying, but hey, teenage girls? If your boyfriend breaks up with you? Yeah, life really does go on. I promise.

I completely and totally agree!