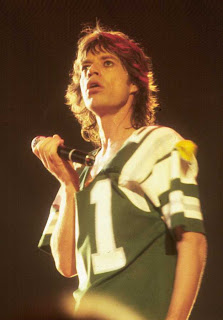 I really want to see Martin Scorsese's Rolling Stones concert movie, Shine a Light playing at Imax (more trailers, here). This could be better than being there, actually. Could be excellent, even. Close ups, bigger than life, select lighting. Aging warriors, they may be, but hey, so am I, sorta.

I loved the Stones since I can first remember. Singing along in the car backseat. Having no clue what kind of satisfaction Mick wasn't getting. Mother's Little Helper? I thought it was a box mix dinner. I was listening to it recently and marveled at Jagger's songwriting ability. To have written about such a sophisticated theme as such a young guy. Even moreso now that I'm helping actual mothers overcome reliance on today's supposed non-addictive equivalents.
In my high school and college years I saw the Stones in Philadelphia, in very large, very packed stadiums. Mick, in all his glory, strutting like a banty rooster, in his lemon yellow football pants and his Eagles jersey, oozing sex and rock and roll, all while draped in the flag (was it USA or Union Jack, or both?) No musical performance since has compared to the thrill of Jagger's total package.
This was in the age of Some Girls (I've kept original jacket with Monroe on the cover) and Tattoo You - my friends and I lived and breathed those two. No keg party was over until we were all up dancing to Beast of Burden, Miss You, Start Me Up, Shattered. I can't hear Shoo Shadoobie without breaking into a smile.
A long time ago I read a piece about the Stones that quoted a groupie who said something like, "being in bed with Mick Jagger is nothing like being in bed with Mick Jagger." The man didn't live up to the myth, apparently, or more likely, the fantasy. The quote has stuck with me. That what you see on stage and in print is an image, a mirage, and no human being, in bed or out, can approach such a loaded fantasy. Small consolation for never having a shot at him myself, huh?
I'm preparing myself for the fact that Shine won't hold a candle to those performances in the 70's and 80's. No expectations of the same level of musical greatness. Just hoping I'm not too disappointed. Either way, the Stones are still amazing, given their longevity, given that they are still alive after all that hard living. So I hope to enjoy the film, a final revel in Jagger's swagger and Keith Richard's grinding guitar riffs. I want to feel a little of that old thrill, and then go home and appreciate the normalcy and real offerings of family life (yeah, rrrrrrright!)

I think I'll entice my 17 year old son to see it with me (the fact that I'm buying the ticket should do it).

I am looking forward to that movie too.

Maybe the 17 yr old needs to see one of the young Stones concert movies, to appreciate what Mick USED to look like, the pre-skeletal Mick : )

Yeah, I don't know what the hell ever happened to Mick Jagger. He was unbelievably luscious as a young man, and now look at him! He looked so good when they played Hyde Park in the 60's.

Aw, you're too kind!