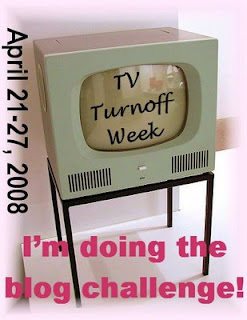 Speaking of research that states the obvious a la Mrs. G (my new favorite blog parking space), what are your predictions about the effects of excessive TV viewing on kids?
If you guessed poorer health ratings and lower academic performance you've either got excellent parenting instincts or you've been paying attention to the news. Additonal problems include sleep disturbance and an increased risk of smoking (even without cigarette ads).
So what percentage of kids would you guess have TVs in their bedrooms? 10% ? 20% ?
Now, let me preface this discussion by saying that I'm not a TV nazi. My kids have a small TV in their playroom. They watch their fair share and I'm fairly defensive about that. Cognitive dissonance isn't just a figment of social psychologists' imagination, afterall.
But I am a strong believer in moderation which is not to say I'm always a staunch defender of my own beliefs. But I am pretty sure my neighbors will tell you (maybe complain) that my kids see plenty of fresh air and sunshine.
And I don't want to leave the impression that prefrontal cortex abuse is something I reserve for my kids. I watch my fair share of TV, too. Life as I know it, afterall, would lose its meaning without The Office to remind me why I got my PhD in the first place (we all know a real life Dwight) and Jon Stewart's Daily Show to remind me why I need to vote every single election.
But there is one shining notation in my reluctant TV habits. I was over 40 before I "agreed" to have one in my own bedroom. This only happened because hubby, Sam, convinced me we needed a flat screen, and a "resting spot" had to be found for the old family room dinosaur. It found a permanent home on the master bedroom cedar chest which was conveniently positioned next to the cable plug. Voila. A third brain sucker is born.
Ok, so what percentage of kids have a TV in their bedroom? Studies say 50%. Maybe even as high as 70% for 3rd graders! As a mental health clinician, I often say "nothing surprises me" and this doesn't surprise me either -- it shocks me. Especially given the uber parenting age we live in and repeated warnings from children's advocacy groups (such as the American Academy of Pediatrics).
So at what age are kids getting TVs in their rooms, would you say? Try 30% in the 3-6yr age range. Wow.
Researchers and teachers have begun referring to the "zombie" effect: kids who come to school showing minimal emotional reactivity. Sadly, little television drones are being created in this great land of wealth and opportunity and 500 channels but nothing on.
So whatcha gonna do about it, Willis? Not much. Except maybe participate in and pass on the word about TV Turnoff Week beginning April 21st. Who else is game?
Thanks to the Anxiety, Addiction and Depression Treatments site for posting this summary of recent findings about kids and television viewing.
And in case you've noticed, I have only figured out how to insert one picture into my blog piece. When I try to add a second image (Arnold from Diff'rent Strokes), it sits right on top of the other, instead of in the midst of the text, where I want it. Anyone up for yet another tutorial?

We literally cut the cord on the ONE television in the house when the kids were in elementary school.

And they were amazing students.

Right now, we only have one working TV in the house. We moved into an older home (built in 1972) and it has no cable outlets in any of the bedrooms. I thought I would die at first. But, it is so refreshing. Like you, I only need my "Office" fix once a week and that fulfills my need for TV. This was totally different than how I've always been. I've always been a TV-aholic. Emma watches too much TV now I worry. She watches it for about an hour each morning while I..um...blog and she watches it whenever I need to keep her occupied so I can do something. But, I do worry that she'll end up being a couch potato.

We have 3 TVs in our house....major big one in upstairs family room, one in the downstairs family room that is used almost entirely for playing wii, and one in the master bedroom. TV for us is one of those things where I don't set many limits and that has made it not very enticing. Most days none of them are turned on until well into the evening when Dad gets home.

I will say...my oldest watched quite a bit of TV as a toddler. I was finishing up my degree and was extremely busy. I didn't have fulltime daycare and had to get everything done with her home with me. So the TV definitely was a babysitter every now and then. She is no worse for the wear. She is a very bright and sociable teenager now, very physically active.

Anon, I haven't set stringent limits either, and my kids have all done very well to extremely well in school. I think "punishment as discipline" analogy fits here. When its overused, particularly used solely, it can be detrimental to healthy development. But in moderation it can be an effective learning tool.

Therapydoc, I've had thoughts of cutting cords, many, many times. Haven't had the nerve or the will to go through with it. But often imagine what life would be like without the TV. Or without "screens" as we call them (computer, video games).

We have t.v. in our house--but never, ever in the kid's bedrooms. I did a post on this as well after reading a NY Times article on the subject.

You can definitely look at a class full of kids and tell which ones watch the most t.v.

yes, jenn. no tv's and computers in the bedrooms, esp not with internet access. my, how scary a thought that is, now many kids are alone in their bedrooms surfing away, exposure to so many of the ills that internet brings into our homes.

my oldest wants to save up and buy a laptop. i figure he will be long out of the house before he is able to afford one. but if he does surprise me, i told him there will be strict useage rules.

My child has a tv in her room, but only watches it in the am as she gets dressed. I do think it is because of her temperment. She is a quiet child, reads, etc. I'm not a big TV person either, so it may trickle down that way. But my hubby and his family are tv watchers. Leaving tv's on wherever there is one. Too much noise for me.

We have one TV and I pretty well never switch it on until the children are in bed. They watch Dr Who on Saturday and they watch one prerecorded DVD a week and the occasional bit of sport but that's it.

You can tell which children watch a lot of TV from the way they play as well. When I have TV addicted children round here - they just play games (often violent) re-enacting their favourite TV shows. Whereas my children make up games and use their imaginations.

I stick by my TV Nazi stance even though it means my children are noisier and my house is messier as a result.

But they do use the computer an hour a day - which is just the same really. So no Perfect Parenting here!!

Thanks for visiting by the way. I've added your blog to my reader so I will be back.

we have three tvs .... one in my room , rarely used....mostly because of the POOR picture quality ... same dino story as yours ....
one in the family room ....
and one in the basement play area that is primarily for vid. games ....
that said, my kids would probably call me a tv nazi .... they have limited screen time on school days, and on weekends, they want it for computer and vid games ....
that said, i have strong rules, but am happy to break them, we watch american idol together as a family ....
and, my twins have laptops, but can only use them in the family room .... and not on mind numbing activities during the week ....
it is all VERY subjective .... and i'm bossy ......

Hey, first the tutorial... :) You just need to click on the 2nd image and drag it to where you want it. You'll see a cursor as your are dragging it and then it lands there and you can adjust the text around it. Hope that makes sense!

You have really captured how I feel on this post. I know it is lame to just nod, nod my head, but my house sounds very similar. My children are younger: 3 & 4, but we definitely limit the TV. And they watch only things selected by us. There will be no TVs in their room and no cell phones. I think of TV like dessert. Sometimes you have it, sometimes you don't.

Of course, we haven't even brought up internet addiction and emulating mommy by blogging....

And yes, we won't be discussing the detrimental impact of mommies who blog WHILE watching TV. Too many variables to account for. It wouldn't be good science.

thanks, e. my blog still hasn't quite decided what it wants to be when it grows up (so many choices!)so I do appreciate the encouragement.

For someone who didn't follow blogs AT ALL a few months ago, save for a few political ones, I'm sure digging this : )

my kids have no tvs in their room and never will -- I am a happy "mean mom".

oh and to top it off we do not even have cable so just 5 channels -- I know I am mean-- and dh is cheap!
jeannie

Hmmm, someone said you can click and drag the images, going to try that.

Meanhwile, I just cut the code for the photo and paste it where I want it to go.

I'm addicted to cable news, political pundits, like Chris Matthews, and Sex in City reruns. Oh and Project Runway. Would have a hard time giving that up, too. Husb watches Jim Cramer's Mad Money - that's pretty much a daily thing. But yes, there is a ton of cable tv that is just a waste of money.

I'll come clean. My daughter has one in her bedroom (with a built-in DVD player). Does that count as a double sin?? *checking own head for devil horns* :)

But she rarely uses it. Sometimes when she's sick, she'll put on a movie when she's lying in bed or she'll pop in a CD to listen to.

It's all about usage really and I don't think it matters if you have one or five tvs.

Ultimately you're right, HealthPsych. It does come down to useage. Once upon a time I woke up at 5am and thought I heard talking in the kids' playroom, it was one of my daughters watching Disney Channel. This is what comes to my mind when I imagine my kids having a tv in their room - sneaking to watch more tv, un-supervised use, falling asleep to the tv. So you make a valid point, that the tv "in the bedroom" is not the true problem.