digi-history in the making: first text ever from my husband

Whereas I am ever one-pay-scale-away from becoming a device-slut, it could be said that Sam has bought a ticket on the slow boat to digi-land.
As in,
- it was the year 2010 before he replied to his first email
- 2011 before he composed one from scratch
Put a nail gun or a miter saw in his hand and he is home on the range. Digital texting? Not gonna happen.
Until tonight. He is away tending to his mother. He and his sister are at her house. It's looking to be the first step along the path of moving her toward an assisted living situation. Convincing her. Not something any son or daughter looks forward to.
So while I was grocery shopping, I sent him a text for the first time* 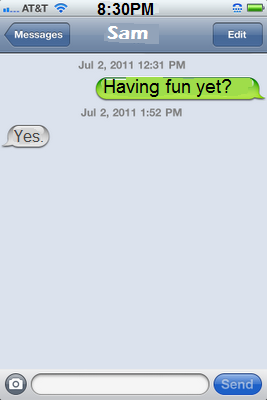 A bit anti-climactic, wouldn't you say? Instead of replying, I just smiled. And waited for him to call, i.e., bypass the whole confounded texting nonsense. In his mind, not mine. Me? I lubs me some texting.
*Thanks to Mental P Mama and her Parentexting series, I was able to take a screen shot of her screen shot and pretend that I can take a screen shot of my own.

My husband and I are both texting fools--if you want to communicate with the kids, you gotta communicate the way the kids communicate.

I can't get him to check his Facebook more than once a month, though. When he does get on he posts things on his wall that are really intended to be on other people's walls. Baby steps.

He's got to start somewhere. I think it is simple and sweet.

We text a lot. Mostly dumb stuff like what train I'm on.

You have an iPhone? Press both buttons at once and you get a screen shot.

My sister and I tried to talk my mom into joining the ranks of texters. "But why is it better than just calling someone?"

My husband doesn't text but he will send me e-mails during the day and I e-mail back on my iPhone. I love my iPhone.

(I can do screen shots because, you guessed it, my 15 year old showed me how.)

LOL...email me! It's easy to do a screenshot!

Awwww, he was a text-virgin! Isn't that cute :D

I don't like to brag you know, but I've taken a few text cherries in my day.

On an iPhone, hold the top button down and then the round button until you hear the "shutter" noise of a picture being taken. Easy peasy.

I have no idea how to take a screenshot either. That's quite a big step in your relationship.
+followed

My husband and I are just like Jenn@juggling life and her husband, texting fools!!

How fitting that his first text sums up his interest in the medium.