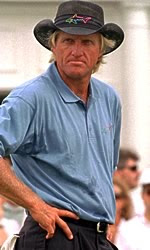 Are we all watching the fabulicious Greg Norman trying to win the British Open? He would earn the distinction of being the only man to win three British Opens in three different decades. He would also be the oldest man to win a major. But what is age, really, when you look this good?
He ended yesterday winning. He's slipping behind on the leaderboard, today. We must use our collective voodoo to nudge him onward.
He sure is a tall drink of water. 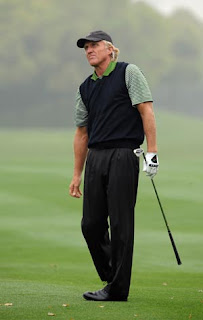 And the best part? He gives credit to his new bride. Is there anything more sexy than a man who truly appreciates the woman in his life? And talks about it in public? Swoon.
When I was in 9th grade, on the tennis team, I had a Chrissy Evert wooden racquet. The one with the long grip to accomodate her famous two-handed backhand.
I worked really hard on that backhand. I wanted to look just like Chrissy.
.
. 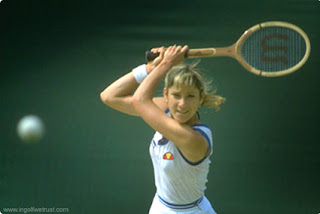 I've since gotten new racquets and I've pretty much dropped the two-handed backhand, but she's still my tennis idol.
So she and Greg together? Its almost better than being there.

sadly, he has a reputation for choking.

doug was telling me about one time when he went into the final round of the masters with a six-stroke lede. and lost.

i think he looks like Sam Malone, from Cheers.

We are watching too. I love the shark!

He choked! Actually apparently he didn't - just that the Irishman played better on the day. Not a bad way to spend the final leg of your honeymoon!

We opened a bottle of Greg Norman wine in his honor last night. Even though he didn't win, the wine was quite delish.

mary - I think its amazing he played as well as he did. I bet at the end of the day he felt pretty good.

manager mom - I didn't know he had a wine label, too. I hear he's quite a successful businessman & course designer. Gosh, all this and a great bod!

Greg Norman? Noooooooooo. Tell me it isn't so....!

Maybe we should plan an intervention, Alison.

From Cusack to Norman? Must be something adrift here! What next, Manilow?

hp and alison - tell me what I'm missing!!

Yes HP! Meet me secretly in cyberspace a 4am tomorrow and we shall discuss the said matter hee hee.

Now I can't speak for HP, PHD, but I think down here that generally speaking ah... Greg Baby is considered well - a wanker.

Australians get really pissed off with a "native" losing their accent. Greg rarely, if ever mentions his homeland and if he ever comes back here nobody knows about it. That may be him being really smart and keeping it quiet.

We are a little, proud population on a huge continent and we have fought to have an identity. Before the sydney Olympics most of the northern hemisphere confused us with Austria (with the exception of the Austrians). So Greg's dismissal of where he comes from frankly goes down like a bucket of shit (that's Australian for "really badly").

Whenever mentioned, again it's rare here, it's because someone is making a cruel joke...(that is usually really funny,sorry).

Australia is renowned for irreverent humour and sadly the "tall poppy syndrome" which is now thankfully dieing. Tall Poppy = We have been historically cruel to any Australian that looks like they're doing well.

So it's not all his fault and I don't know if I've been entirely accurate, but hitting pretty close to the mark I think. ( also think his politics are ugly-right-wing too - could be massively wrong about that, but hell he looks like he is. Sorry).

and... just to prove the aussie point, i had no idea he was from australia .....

I wonder where they go on vacation...sorry, I've been fantacizing (sp???)about a real vacation...it's all I think about.

alison - so there's a trend of australians turning their back on their homeland? tall poppy syndrome. thanks for the education.

e - I still occasionally use a two-handed but its harder on my back (requires more twist), its more restrictive, harder to get around on the run, and a one handed allows me to put some underspin on the ball. the pros can do that with two-handed - witness serena & venus - but not me.

stacie - I bet they can go anywhere they want!

No there's no real trend as such of Aussies turning their back on home.

Grog Mormon is about the only celebrity I know of who does.

Still he's got the right nick-name!

I think Alison summed it up succintly with the 'W' word. I don't get all bristled about the 'turning his back on his homeland' thing because I'm not an Australian...but the man just bristles me anyway.

But, in terms of the confusion about the national identity of Australia, as I departed the shores of my homeland, even I thought I was headed off to live in Vienna.. :)