answers at any hour


One of the things I love about "the internets" is the ready availability of answers. Answers in pictures, even. A virtual, day or night, daily updated encyclopedia.

Last night, for instance. I'm reading For Love, by Sue Miller. The heroine keeps mentioning the "porte cochere" on her neighbor's house. Its part of the story.

What the heck is a porte cochere?

I get out of bed. Sit at keyboard. Open Google. Type 12 letters in the long blank box. Hit return. Voila. 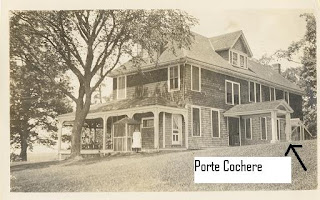 French for "coach door," it says. "The architectural term for a porch or portico-like structure at a main or secondary entrance to a building, through which it is possible for a horse and carriage or motor vehicle to pass, in order for the occupants to alight under cover, protected from the weather."

So one of those side-of-house car port thingies.

Oh, but wrong, continues my other late night resource, Wiki.

"Porte-cochères should not be confused with carports in which vehicles are parked; at a porte-cochère the vehicle merely passes through, stopping only for a passenger to get out."

So now I know.

Back to the story.

Email ThisBlogThis!Share to TwitterShare to FacebookShare to Pinterest
Labels: books, this and that

Learn something new every day!

My problem is that I think of a question, google it, that take me somewhere else, then somewhere else and an hour later I have forgotten what the original question was!

snooty book, using french when english would do!

See now, the house I grew up in had one.

ann - it will be a sad day when that stops, huh?

mary - all.the.time
I'm especially bad with email replies. I'm in my kitchen, think, Oh NO. Must reply to that email. Sit down. 30 minutes and a dozen webpages later, no email.

laurie - I still say it's car port, by goddess

magpie - There are lots where I grew up. But some houses in my hometown were c1600's.

Yes, yes. Our two porte couchere's grace the front and back sections of the home and are rather handy when the guests arrive, as of course, there is a brief moment or two before I present myself, draped in chiffon and wearing socks and sandals, screaming.

Nah seriously, I like that word and even more I wish I really did have even one of them. Not doing anything this weekend, so you never know.

Yes, the Internet is simultaneously a boon & a scourge (I frequent Thesaurus.com; can you tell?).

I'm the worst with IMDb while watching videos - "Hey, what else was that guy in? Did you know she's married to...? How old do you think so & so is?" Resisting the urge to take laptop to the theater is very very hard.

alison - I rather like the chiffon with socks and sandals, especially if they're birks

stephanie - YES! that's an even better reason "why google is my best friend" -- movies. I'm very good with faces, I'm terrible with names. I can miss an entire plot line because I"m obsessing over where I've seen that bit actor. Its SO satisfying to finally figure out the puzzle.

gotta love google, although sometimes you find stuff you really didnt need or want to know about LOL

I love Google and IMDB. No more wondering who that actor is or what other movie he was in.

I love the net for the same reason(s)

See? Learn something new every day.