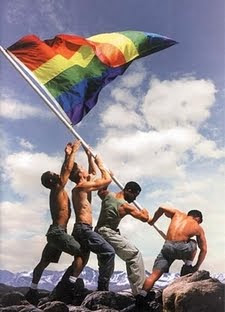 The core violation of family values occurs, instead, in the homes of gay repudiating parents whose fear, ignorance and narcissism prevents them from fulfilling their fundamental Christian duty: to provide a safe upbringing to their children. To love them.

AMEN! It's way past time for Christians to STOP with the hating and LOVE MORE. Not only is it alienating and mean-spirited, it's not making God happy.

In my experience, the more Christian someone claims to be, the less Christian their behavior is.

Could not possibly say it any better.

I don't understand how these right wing conservative Christian nut jobs can't see how wrong their hate is. And how filled with hate they are. And how much of that is just fear based. It's so freaking stupid.

I think the whole idea of 'soldiers for Christ' is absolutely ridiculous. How can you build an army based on ideas of peace? I hope people will soon realize that the only way to win people over (if that's at all necessary) is by love. Hate always returns hate.

How can anyone condemn a person for the way they experience love?

Wonderful post (and I love that picture, too). So much of what those who say they believe in Christ do convinces me Jesus must be in heaven smacking his forehead and saying, "Wrong! Wrong! Wrong!"

Thanks for sharing these professional and poignant sentiments.

The Girl Next Door said...

I was raised to believe being Gay was "wrong." I have come to terms and found balance in my "christianity" I have come to love ALL people no matter who THEY love. Because I believe that Jesus loves us ALL. And it makes me sad when people judge ME based on what some "purported" Christian says.

"Love each other as I have loved you."

Why do people find that so hard to follow??!!

The main thing I don't understand about Christianity is the fact that the people seem to be so incredibly judgmental but the concept is that only God can pass judgment...

So many Christians need to start behaving more Christian-like....seriously, do they not understand that whole WWJD? concept.

Amen, sister! And how do you take living there????

I didn't know it, but I needed to hear this today. Thank you. xoxo

Very nicely said. And I agree.

I have a fair number of gay friends who are over the age of 40 and hence grew up when things were even worse than they are these days. During the AIDS scares of the late '80s, the very religious mother of one of these men (who has never been HIV positive, by the way) refused to let him in her house and refused to use his dishes or glasses at his house for fear of contracting the disease. It hurt him a great deal.
Another fellow grew up gay in the 70s in Star Valley, Wyoming. Can you imagine a less-wecoming atmosphere? A couple of his brothers still barely talk to him. (His sisters were very accepting, though.) And his was also a religious family.
Hence, I've seen a good many of my friends get hurt by the kinds of things you're writing about. Thanks for this post.

And thanks for joining up on my blog!

You're my kinda girl!