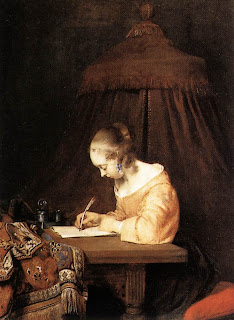 Rachel is thinking about writing a screenplay. In a recent post, she shares some of her screenplay ideas and asks if her readers have ever had a thought of writing one.
I'm one of those aspiring screen writers who fall under the following category: Think-I-Can-Write-One-for-a-Brief-Exhilarating-Moment-After-Seeing-a-Really-Great-Movie.
The type toward whom authentic screen writers feel complete and utter contempt.
My inspiration, as self-aggrandizing as it is, is likely to occur after I watch movies steeped in emotionally-driven dialog. Especially dialog between women.
Discussing men.
And the plight of women. 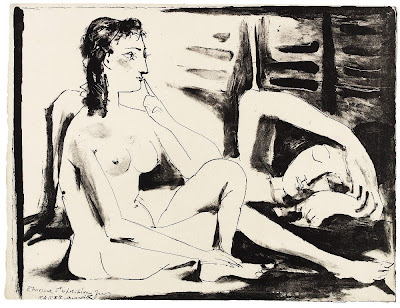 As their plight relates to the men in their lives.
Walking and Talking was one. And Lovely and Amazing was another (Alert!! Young Jake Gyllenhaal sighting in the trailer). And Friends with Money, a third.
Or, apparently, anything written by Nicole Holofcener. And starring Catherine Keener. 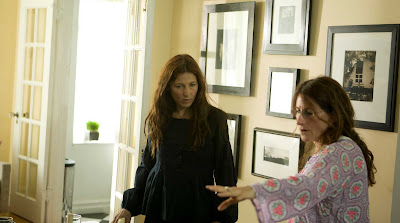 Because I just now googled Nicole Holofcener and discovered that she wrote all three of these movies. I just love how smart I feel with google and imdb in my back pocket.
So yes, periodically, in a temporary state of half-delirium sprinkled with a fine layer of narcissism, I have been known to consider writing a screen play. But that's as far as it has ever gone ever needs to go.
I did talk with a friend once, at some length, about an idea I had: Women gifted with the power of climbing inside the brains of their male lovers. What would we find? Would we be flattered?
Or horrified?
Or horrified by the brand of flattery? 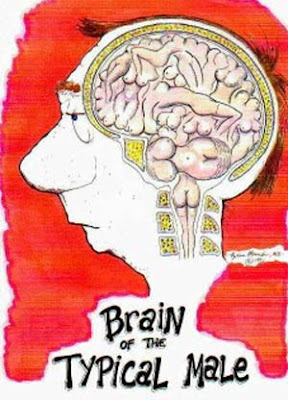 So wouldn't you know, a couple months after this screenplay-idea conversation with my friend, the Mel Gibson / Helen Hunt movie came out, What Women Want. You know, the one where he plays a womanizer and electrocutes himself trying to put on pantyhose and as a result is suddenly able to act read the minds of the women around him.
I am not kidding. About two months after my incredible idea for a screenplay.
And upon seeing the trailer for this movie I thought, Gah! They stole my idea!
Or, the male corollary of my idea.
And my thoughts ran toward, now when I try to publish my screenplay that I haven't even written one line of nor had a single moment's training in the how-to-of, the producers I present my idea to are going to be all, you so stole that idea from Mel Gibson. 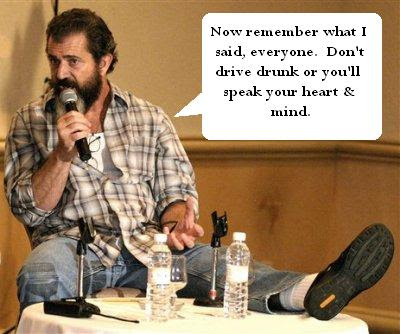 So much for my screen writing career.
How about you, reader? Ever had an idea for a screenplay?

Email ThisBlogThis!Share to TwitterShare to FacebookShare to Pinterest
Labels: men, movies, thinking too much, this and that, women, women writers

I stumble across mysteries in normal life and then movies of why and what-happened-next run in my head...The moving man whose ex-wife called ten years later out of the blue to say she's dying and would he take the son he didn't know they had? Was the little boy really his? How would his wife react? How could they manage a third child?

Some people turn these mini-mysteries into best selling novels. House of Sand and Fog comes to mind. The author read a small notice in the newspaper and ran with it.

And as of your moving man's story. Yes, curious readers want to know.

Yes...Did you see "Somethings Gotta Give" with Diane Keaton and Jack Nicholson? I had been thinking about a the same plot for some time. It was about a woman who falls for her daughter's older boyfriend. Of course I never would have written it. Maybe it just proves that there are only a few basic plots in the universe.

Judy - It's especially depressing when the movie you watch isn't nearly as good as the screenplay in your head. Not that I've ever gotten far enough along to visualize and entire movie, just that some of what I wanted played out would have been funnier and more original. Yeah right. I'll go back to my imaginary life as a brilliant shrink now, too.

Ohhhh. I have many! And one of them is still gelling...

MPM -- better hurry before you see your dream materialize on the big screen!

I find myself inspired after reading a great novel--

I've never been a script writer (even an imaginary one).

The key is NOT to share your unique idea with anyone (especially a girlfriend)! Keep it to yourself, write the story and see if someone finds you just as inspiring.

I only have to look in my dreams for brilliant ideas. Problem is once I've shared my dreams with all by bloggy friends online, I realise it would've made a phenominal story plot. By then I've shared it with plenty Bloggerville mates and the idea is stale.

Gillian -- The truth is, I really do not aspire to write anything quite so large. I haven't the training, talent nor time. What I really wanted, in that conversation with my friend, was to find a good screenwriter willing to accept ideas and sign a contract for me to earn percentage. Lazy dreamland.

I have never thought about writing a screen play. I appreciate movies too much to add any bad idea I might have, hahaha! My son aspires to be a screen writer, we'll see how that goes!

Really, I'm mostly thinking about writing stage and radio scripts... but I did meet someone a couple of days ago who does some screenwriting, so we'll see where that takes me! ;)

I haven't had this with screenplays, but I have thought of little inventions that I never do anything about and then someone else does. Good for them for their entrepreneurial spirit. I don't have that.

I never bothered to see the Mel Gibson movie because I found the trailer for it annoying. I'm certain you would do a much better job.

If not this particular idea, I recall the post you did a while back that got me hooked on your blog: the ones about the various obstacles involved when you first got together with your huzz. Good stuff there.

I learned long ago that there are much more talented writers out there - I just enjoy it when they get their movies made.

I have a screenplay I wrote that I never edited b/c I felt like it sucked. It's not easy writing one, in my book at least.

Desire and ideas galore, but lack the necessary "follow through" gene it would take to actually do it.

When I was a teen I started writing a book, and the idea still has merit (and has never been done) so I may revisit it at some point. (cue laugh track) I still have every hand-written page (computers back then were several hundred pounds, and I didn't have a typewriter).

First, I want to say that I like the snazzy new look, here. Nicely done!

Second, the caption for the Mel Gibson photo is beyond perfect. Love it!

Third, I have a couple of story ideas, but I prefer writing fiction (as in short stories or novellas)...when I actually sit down to write, that is.

Writing screenplays is a little easier than writing stage plays, in my opinion. You have a lot more tools at your disposal. My background is in theatre, but there are a number of plays that I've read that I can visually on screen, and have thought maybe someday I'd try my hand at adapting.

But currently, I have too much other stuff in the way, mentally. These days, I'm not able to clear a space in my brain to actually get any writing done.

before I forget - I love your new header and that tagline is a riot! My first job was working in hollywood for a producer. I had to read 100 screenplays a week, and I can tell you that most of the gift was in the execution. So I say get your hands on a copy of a screenplay you love - see how they do it and go for it. I think screenplays are one of the most fun things to write - it's just too bad they are neither in themselves a finished product or easy to sell. Oh and that business with the ideas? It happens all the time to me too! What's up with that?

The phone call came to the moving man as he carried my boxes in 100+ degree heat. He couldn't eat lunch, he was so beside himself. When he finally sat in the house with cold water and a sandwich, the story poured out of his mouth like it was running away from him.

I never saw him again after that day and I've wondered ever since.

Yes. I haven't gotten to the part where I realize it's just narcissism run rampant. I'm still pretty sure I can right one. It would be about five women. Five different, entirely different women who are connected at the soul.

Suzanne -- I can't take credit for the Mel Gibson caption. I found that on the internets. As well as all the pictures in this post, in case anyone was wondering.

I don't tend to have ideas for screenplays...more for novels really. I had a fantastic idea for a novel set in a funeral parlour, and described it to my husband in great detail, and he said "Been done. You're describing Six Feet Under". Oh well.

Wow, I've had the they-stole-my-idea thought quite a few times. We would usually seat around with my girlfriends discussing a great idea for a screen play, and in a week or so a new release would cover it.

A good thing about movies is that many think of nice stories, but only few are able to film them well :)

You SHOULD write a screenplay. Why don't you write one about some people who tranform into blue aliens and try and save the world from corporate BS? Oh, wait... Seriously, write one. I am going to. The biggest issue I have is getting it read. I don't have the patience for FB. I hate networking. But come on... there has to be some schmoozing. OY.

I actually have a bunch of ideas, but not for screenplays. I would unequivocally suck at that. but I do have my short stories and movie treatments in my mind (and computer). One day, when I can breathe, maybe..

Screenplay theft is a common occurrence, a lot more common than people realize. Sorry for being self-promoting but, I wrote about this phenomenon in my film school textbook "The Reel Truth." It has an entire chapter on screenplay theft and how to protect your intellectual property: http://amzn.to/a7O1qy